When violins dominate the world

If the double-blind testing of old and new instruments has proven anything, it is that the public is captivated by the subject. Could this fascination herald an Arab Spring for the string world, asks Ariane Todes 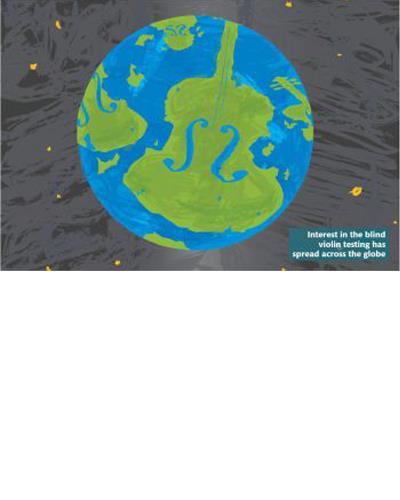 Blind tests come and go. We are certainly aware of that here at The Strad, where we report on at least a couple a year, whether designed to test the effects of fungus, strings, thickness or Swedish violin making skills. The findings of the tests that Joseph Curtin presents on page 48 are not that surprising. They don’t prove (or seek to prove) that modern instruments are better than Stradivaris (contrary to how they have been represented in many places) but they do indicate, at the very least, that not all professional players can really tell the difference.

This conclusion seems fairly reasonable to me, having taken part in the tests myself. I was disoriented by the array of sound as with goggles on I played six instruments in a darkened hotel room. (You can read my blog on the experience at www.thestrad.com.) My own results would satisfy both sides of the argument, as I chose to ‘take home’ the Guarneri ‘del Gesù’, preferring it consistently throughout the test comparing old to new, but choosing modern instruments over the two Stradivaris.

To me, though, the test proved something more surprising than anyone might have expected. It showed that the world at large is captivated by the debate and hungry to know more about our world. This can only be a good thing for all of us, whatever our perspective. The story has been picked up by tabloids and highbrow journals alike and been tweeted and retweeted thousands of times. People might be iconoclastic, cynical, amused or just plain curious, but they are engaged. Of course they are – it’s a great story for our time. Stradivari, one of the bywords for exclusiveness and expense, has had to make space on his exquisite antique pedestal for flesh-and-blood living craftsmen. How democratic is that? It’s like the string world’s own little Arab Spring.

It could be the first sign of it, at least. Maybe the revolution is what happens next, and how we in the string world react. Where I sit, I see how the Stradivari phenomenon (myth or legend, depending on which side you take) propagates. Players think they need to have a Stradivari to be taken seriously. They do anything to get one. They write about it in their CVs and programme notes, so audiences and press people pick up on it and believe that only players with such instruments matter. And so the feedback loop continues. The fact that this research has reached the furthest corners of the world provides a fantastic opportunity to challenge this thinking.

What can we do to keep up the momentum of the discourse? For a start, players can talk about their instruments regardless of what they are – old, modern, Italian, French, Belgian. Write about it on your website and in your biographies. If it’s old, tell the story of its luthier and how you found it. If it’s new, talk about how it was made, how you discovered the maker. What do you like about it and why is it special to you? Maybe this sort of narrative will eventually find a place in audiences’ hearts alongside the old one of Stradivari and his ‘secrets’.

Meanwhile, I have no fear for the classic Italian violins and their owners and dealers. They can hold their own very well. No one seriously believes that the high prices they maintain are due entirely to sound. There are a multitude of factors: provenance, craftsmanship, history, artistry, longevity, supply and demand. Of course no one would deny that a great classic Cremonese instrument is a thing of wonder and beauty and that in the hands of a great player it creates a very special magic. But it’s not necessarily the best choice for every player, or one that they would select if they were choosing ‘blind’.

So, if you’ve never even tried a modern instrument, this is the perfect time. Go to trade shows and luthiers’ events to try new instruments and talk to the makers. Take your friends with you and see what they say. If you really want to test your audiences, try performing on a modern instrument and see what happens. The world is listening now with open ears and it’s time we all do the same.