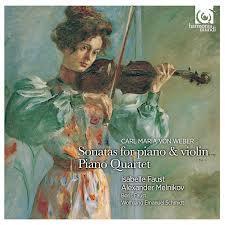 The combination of an original period fortepiano and ‘modern’ stringed instruments promised to be a complete tonal mismatch. However, it works surprisingly well in this vivid recording, thanks not only to skilful engineering but also to these performers’ sensitive, expressive interpretations. They show remarkable unanimity and flair in Weber’s serene Piano Quartet, balancing Classical elegance, wit and sheer effervescence in the outer movements – the first movement’s development and the finale’s fugato episode are especially captivating – with a more overtly theatrical approach in the others. The work’s core, a thoughtful, searching Adagio, includes moments of striking lyrical strength and beauty, especially when the mood becomes more animated and disturbed.

Fortepianist Alexander Melnikov also plays the predominant role in Weber’s ‘Six sonates progressives pour le piano-forté, avec violon obligé’ op.10, giving an immaculate display of bravura throughout. Isabelle Faust matches his nimble athleticism in the fiery opening Allegro of no.6 and the rondo finales of nos.3 and 4, and both performers contribute a wealth of insights, cleverly conveyed by subtle shading, beguiling phrasing, charming rubato and deft characterisation. They particularly capture the spirit of the Spanish, Russian and Polish folk melodies incorporated in nos.2, 3 and 6 and give a masterful account of no.5’s variations on a theme from Weber’s own opera Silvana.