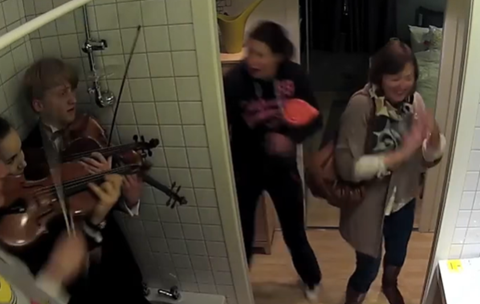 ’Interest rates are rising as is my heart rate; I hate house hunting!’

House viewing can be nightmarish at the best of times. There are so many potential hazards to look out for: subsidence, mould…but hidden violinists?

A hidden camera prank reveals violinists hiding in the shower during house viewings…and you can guess what happens next.

Bernard Herrmann’s music for the 1960 film Psycho is one of the most recognisable Hollywood scores, with its screeching violins, a 7th chord containing both major and minor intervals, followed by lower string interjections as Marion Crane meets her ultimate demise (not a spoiler, this film is over 60 years old). It’s no wonder the prospective house-hunters have the reaction they do…

Read: Strings in film: Leading screen composers discuss their use of the broad string palette