The British violinist will receive her Honorary Doctorate alongside students graduating from the Faculty of Arts, Design and Media – including Birmingham Conservatoire – on 24 July 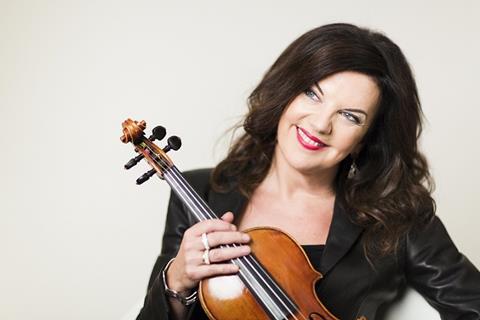 Tasmin Little is to be awarded an honorary degree from Birmingham City University, UK. The British violinist will receive her Honorary Doctorate from University Chancellor Sir Lenny Henry alongside students graduating from the Faculty of Arts, Design and Media – including Birmingham Conservatoire – on 24 July, in a ceremony held at Symphony Hall.

‘I’m thrilled and honoured to receive an Honorary Doctorate degree from Birmingham City University,’ said Little. ‘I have so many wonderful associations with the city of Birmingham and the Midlands. I have played for many years with the City of Birmingham Symphony Orchestra for the marvellous audience at Symphony Hall, as well as at Birmingham Conservatoire and other concerts in the immediate vicinity, including my mother’s birthplace, Stratford-upon-Avon. I am looking forward to this exciting day hugely.’

An exclusive Chandos recording artist, Little was appointed an Officer of the Order of the British Empire (OBE) in the Queen’s Diamond Jubilee Birthday Honours List for services to music in 2012.