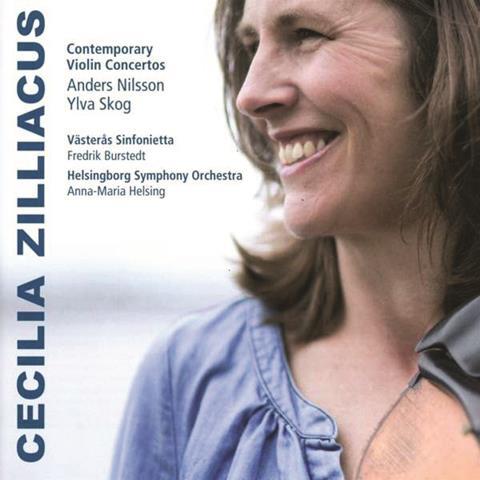 Two accessible contemporary violin concertos by Swedish composers, given persuasive performances by their compatriot Cecilia Zilliacus, make for an interesting rather than †¨a truly compelling disc. With its rushing minimalist figures, jazzy brass and infectious grooves, it’s hard not to like the 2015 Violin Concerto by Ylva Skog. But its solo violin part feels curiously undemonstrative and not especially violinistic, at least not in the first two movements, which allow Zilliacus little chance to shine. She does, however, give a beautifully direct, no-nonsense account, her focused, sometimes slightly piercing sound cutting through the richness of Skog’s orchestral writing, before things burst into more vibrant life in the folky finale. The recorded sound is clear and very warm here, although somewhat heavy on the bass. Anders Nilsson’s 2011 Concerto is far more chromatic and demanding – and its more traditionally virtuosic violin writing allows Zilliacus to show off her easy agility, tonal flexibility and beautifully judged vibrato. There’s a feeling of sadness and loss across the whole work, written shortly after the death of the composer’s mother, but also distinct nods to Berg, Mahler and even Glass that sometimes threaten to weaken its individuality. Zilliacus is more forward in the recording mix here – to the extent that her pyrotechnics sometimes overshadow orchestral detail. It’s a fine disc, but there’s also the undeniable feeling that both performers and music fall a bit short on character and vividness.