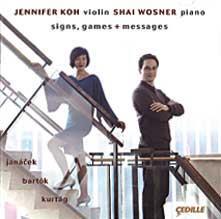 Right from the start of this generously filled, folk-inspired disc, there’s no doubting the passion and intensity of US violinist Jennifer Koh’s vivid playing. She attacks the opening of the Janácek Sonata with a fast, narrow vibrato and a bright, strongly projected sound – although she tones things down a bit in a beautifully shaped second-movement Ballada. Most of the time it’s a wonderfully effective approach, and a hugely characterful one, but it can get a bit too much – the ferocious way she dispatches the last movement’s enigmatic mutterings, for example, underplays some of the music’s fantasy and wonder.

Her natural feeling for characterisation comes into its own, though, in the set of Kurtág miniatures from Signs, Games and Messages and Játékok between the two sonatas. Koh’s spirited ‘Cadenza Jig’ more than lives up to its title, and her control of tone and pitch in the mournful ‘In memoriam Blum Tamás’ is superb.

Pianist Shai Wosner is a committed partner, although his sometimes clangorous, richly pedalled playing can dominate at times – but it’s all captured in a bright, vivid recording.