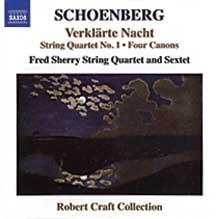 Hearing Schoenberg’s two early string masterpieces side by side, as here, makes one realise how far he had travelled as a composer in the five years that separate them, despite their outward similarities. Both follow journeys from a troubled D minor to a transcendent D major, but the quartet, composed in 1904–5, takes a thornier path than the sextet, with swathes where extreme chromaticism and contrapuntal complexity look forward to the atonal works to come.

This quartet is not an easy work to project, with its single, 45-minute span encompassing all traditional four movements of the medium, but the Fred Sherry Quartet, led by no less a violinist than Leila Josefowicz, has its measure. The polyphony is well conveyed, not least thanks to the way the recording places the four players in perceptibly discrete positions in the stereo spread (something that takes a little getting used to, it must be admitted). And there’s a real sense of interplay between the musicians, as well as an almost analytical exposition of the way Schoenberg engages with his material, inspired as it is by Lisztian thematic metamorphosis.

Verklärte Nacht emerges as one of the most humane and well-argued interpretations of its string sextet version, with a strong emotional imperative and a loving attention to textural detail. Four of Schoenberg’s playful Canons provide a sorbet-like refreshment after all the heat of the main works.