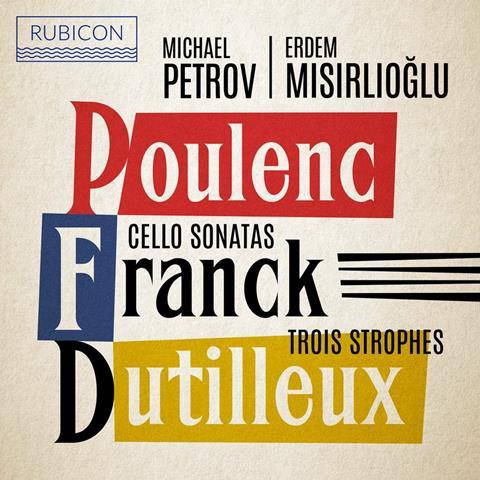 Description: Eloquent performers are fully up to the technical demands of the music

Dutilleux’s Trois Strophes was commissioned by Rostropovich to celebrate Paul Sacher’s 70th birthday with a solo cello piece based upon the musical letters of his name. The ensuing hexachord percolates through three poetic stanzas, which covers the extended range of the cello by using scordatura on the lower strings. The texture is punctuated by left-hand pizz, col legno, false harmonics and complex double-stops. In fact, the figuration is so intricate that it requires considerable decoding before the performance process even begins. Michael Petrov provides a winning narrative through the twists and turns of rhythmic figures and percussive chords with a really precise observation of the dynamics. The score teems with performance instructions that almost elevate timbre to structural importance, and Petrov celebrates this aspect in his vivid rendition.

Poulenc’s Sonata is equally demanding with taxing shifts between registers and tricky passagework. The performer must toil, yet give the impression of effortlessness in the teasing whimsical invention, brilliantly achieved here by Petrov and Misirlioğlu in a warm but clear recording. They enchant in the Cavatina, poignantly shaping the soaring melodies. The capricious nature of the music returns in the Finale, vividly portrayed here with neat virtuosity, following the stormy double-stops of its opening. Equally convincing in Franck’s Sonata, the players adroitly steer a path between reflection and intrepid fervour in the passionate invention of the music.