Bruce Hodges watches the performance from the Constellation venue in Chicago on 21 November 2021, from the comfort of his own armchair 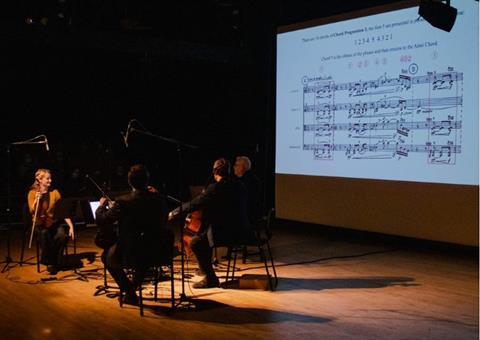 In the weeks prior to this concert, the Spektral Quartet announced that the 2021–22 season would be its last. Given the ensemble’s contributions to the field, the repertoire and to general, all-round joy, this comes as sad news.

As part of its final hurrah, this humorous, bittersweet evening – live-streamed from Constellation in Chicago – demonstrated why the foursome will be much missed on the current vast string quartet scene. If nothing else, an entertaining opening auction – with violist Doyle Armbrust tossing squibs of the group’s spunkiness – made a non-traditional start. Listeners should investigate the group’s 2017 recording, Serious Business, nominated for a Grammy Award, and with one of the cleverest cover photographs in recent memory.

The subject at hand was Dutilleux’s Ainsi la nuit, the composer’s sole string quartet, and a gorgeous example of his meticulous style. Written for the Juilliard Quartet, it is well worth an evening’s focus, and the players had clearly spent untold hours rehearsing the often-subtle effects.

The quartet began with the first half of the piece, followed by illuminating comments from Kendall Briggs of the Juilliard School. But perhaps most moving of all was a filmed glimpse of the composer himself at the piano, grappling with his own sequences and joking about their difficulty.

After this extended exploration of the score and its history, the group plunged into a complete reading of the work, drawing out every last breath of its grisaille palette. The Spektral players magnificently demonstrated that – like many string quartets written over the past two centuries – it is worth the journey.