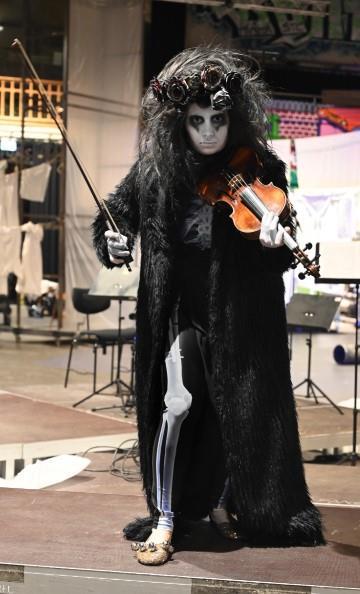 Patricia Kopatchinskaja’s concept-album arrangement of the ‘Death and the Maiden’ Quartet made startling but insightful companions of Schubert, Dowland and Kurtág when Alpha released a live-recorded audio version with the Saint Paul Chamber Orchestra. Five years on, the project has been transferred to film, although it was presented here as a one-off live-streamed performance. It brings gains and losses.

The theme of a medieval Totentanz – dance of death – is established from the outset by a lot of shrieking and cackling as the members of Camerata Bern run into an old warehouse by a railway line. The Quartet begins in Kopatchinskaja’s signature style with the kind of rhetorical tempo shifts and extreme rhetoric that would turn many modern listeners’ hair white if perpetrated by an old Romantic like Willem Mengelberg.

Confirmation arrives that the violinist has finally jumped the shark with her crooning of Schubert’s little Death and the Maiden song like an out-take from Pierrot lunaire (mercifully absent from the original album). The technical accomplishment and tight-knit ensemble on show – Kopatchinskaja seems to have full buy-in from the Camerata members – can’t (for me) disguise or redeem the sense that Schubert (and the others) have been abducted to take part in a gothic rite of death decked out in black make-up.

In fact the interludes are accorded more respect than poor Schubert. A Gesualdo madrigal hardly misses its text when played with such purity and refinement by one-to-a-part strings. At the film’s still point –night being darkest when dawn is near – the Ligatura-Message to Frances-Marie (Uitti, the American cellist) by Kurtág is an exquisite triumph of refinement, at least until Kopatchinskaja emerges from a sarcophagus-turned-costume to play the celesta’s final notes. Somewhere, choked by acres of white tulle and the clatter of passing trains, a meditation on life’s transitory nature is struggling to be heard.