Engaging collection tracking the career of a virtuoso gamba composer 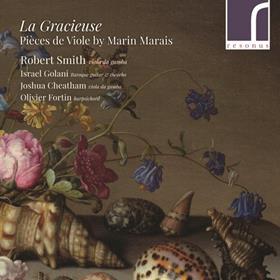 The present collection represents the tiniest tip of the huge iceberg that are Marin Marais’s roughly 600 pièces for viola da gamba and continuo. Published between 1686 and 1725 in five books, themselves divided into suites according to key, they include all the usual dance forms – allemande, gavotte, gigue and the like – but go way beyond them by including impressive variation movements and eloquently descriptive character pieces, some of them intended as homages to the composer’s friends and patrons. This selection includes 29 pieces taken from all five books, thus allowing listeners to track Marais’s progress from young, fire-eating virtuoso to wise elder with nothing to prove (the informative, engagingly written liner notes give further help).

The lifelike recording has the group clearly placed within the stereo image, with Robert Smith deservedly centre stage: cannily as the continuo has been ‘orchestrated’ to reflect Marais’s kaleidoscopic fantasy, this is unequivocally his show. Smith is completely at home in the music’s intricate idiom; with him, embellishments – including vibrato – are always convincingly integrated into the melodic line, agogics never calling attention to themselves. His variegated handling of chords runs the gamut from polyphonic clarity in the fugal movements to the gruff eruptions of the late, enigmatic ‘la Maupertuy’. The courtier Marais’s excursions into the ‘real’ world in pieces like ‘la Matelotte’ or ‘la Biscayenne’ bring forth an exhilarating joie de vivre from all concerned.