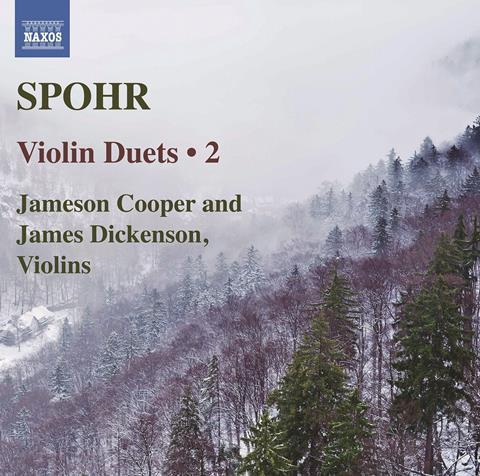 Description: A chance to discover more delightful duets designed for a domestic market

Given the violin’s propensity for multiple-stoppings, brilliant passagework and soaring cantabile, it is surprising how little duet music of quality has emerged over the years. This makes the relative neglect of Spohr’s three op.39 duets all the more unaccountable. It seems Spohr composed them in conjunction with a major tour in the hope of tapping into the (then) healthy market for domestic duet music. That said, even the gifted amateur would need to be on top form to negotiate some of the thornier passages in these masterly scores, which combine bracing thematic interplay with passages of beguiling harmonic sumptuousness.

Following on from the first volume in their groundbreaking recorded survey of the complete Spohr duets, Jameson Cooper and James Dickenson exult in the music’s spontaneous flow of sparkling invention, playing with a golden-toned poise and affectionately phrased precision that falls gracefully on the ear. Cooper doubles for engineering duties, subtly distancing Dickenson’s playing so that at any given point one knows exactly who is playing which line, thereby adding substantially to one’s enjoyment of the music’s occasional quick-fire exchanges. It is a sure sign of Spohr’s underrated ability as a composer, as well as the rapt quality of these exceptional performances, that it is often when the notes stop flying that – as in the opening Andante of no.2 – the magic really starts.