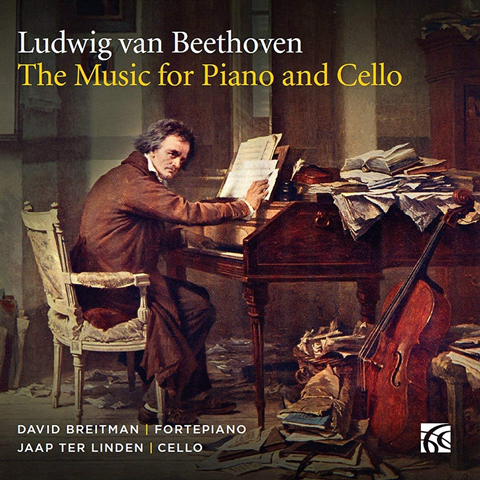 When played on instruments balanced as originally intended – with the fortepiano marginally taking the lead in op.5, but with an enhanced sense of equality in op.69 and op.102 – Beethoven’s cello sonatas emerge with a bracing inventiveness and power to shock denied by traditional readings and modern set-ups.

Beethoven’s creative psyche was in part shaped by an innate desire to push the instruments of his time to their physical and expressive limits, and it is this sense of living close to the edge that David Breitman and Jaap ter Linden embrace with infectious exuberance, captured in sound of alluring warmth and detail.

The two op.5 sonatas can easily become bogged down in over-emphatic gesturing and generously opulent textures, yet here they emerge with a spring-like freshness that keeps the music continually on its toes, most delightfully in no.2’s rondo finale.

The enhanced lyricism of op.69, played with sparing vibrato, retains its Classical sparkle and precision without a hint of bogus Brahmsian cantabile, although finest of all are the two op.105 sonatas, fully bearing out Anton Schindler’s observation of the D major Sonata’s Adagio as ‘among the richest and most deeply sensitive inspirations of Beethoven’s muse’. Even the fugal finale emerges as the natural outcome of what has come before, rather than a mere precursor of Beethoven’s late-period contrapuntal obsessions.