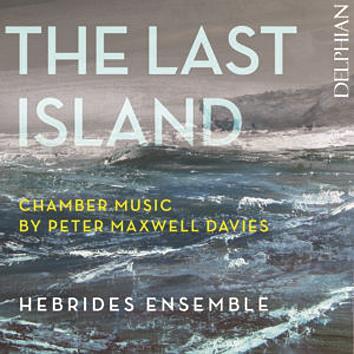 It’s hard to imagine more authentic performances of this collection of late chamber works by Peter Maxwell Davies – including his final piece, the String Quartet Movement (2016) – than these by Scotland’s Hebrides Ensemble. Maxwell Davies had a 30-year relationship with the group, and the musicians’ incisive accounts, at once rapturous and hard-edged, wonderfully capture his sense of rugged fantasy.

The Hebrides players give an atmospheric, restrained account of the string sextet The Last Island, full of grit all the same, and they’re hugely athletic in an arrestingly raw performance of the more austere String Trio, with fine control of phrasing and articulation, and immaculate ensemble. Maxwell Davies himself noted that the Two Nocturnes for piano quartet are unlike anything else he ever composed: written while he was recovering from surgery and heavily drugged, they’re unreal, elusive pieces, as though time itself has stretched beyond recognition, and played here with intense lyricism. The 2008 Violin Sonata gets an astonishingly violent but gripping performance from violinist Zoë Beyers and pianist Philip Moore, with an almost surrealist sense of gleeful grotesquerie, and there’s a touching feeling of valediction to the Hebrides’ String Quartet Movement (2016), as its slow-moving harmonies slowly coalesce into tonality, and its propulsive energy dissipates into serene stasis.

These are deeply felt, thoughtful yet vivid performances, and the recorded sound is gratifyingly warm and intimate.