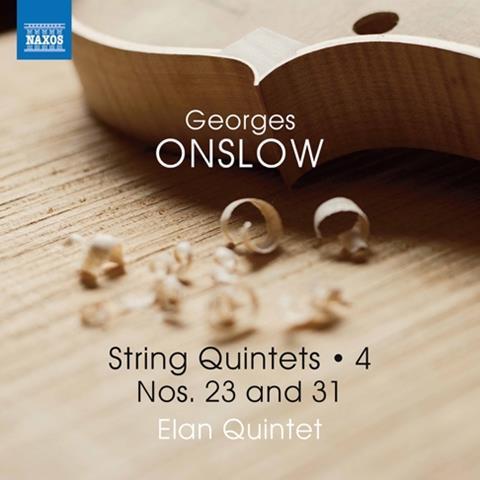 This project’s fourth volume of music by French composer George Onslow (1784-1853) reveals the Elan Quintet as an excellent advocate for two more of his 34 genial and mostly ‘flexibly constituted’ string quintets. Although first violinist Alexander Nikolaev and cellist Benjamin Birtle are predominant, their colleagues also contribute significantly to the dialogue. Even bassist Matthew Baker gets in on the act, whether providing lyrical thematic material, as in the first movement of op.58, reinforcing the cello line or underpinning the texture with weighty pedal notes at significant structural points.

Tempos seem largely apposite and remarkable unity of musical purpose and realisation are evident, not least in op.75’s second movement, the driving scale theme of which, though more chromatic, resembles the principal idea of the Scherzo of Schumann’s Piano Quintet. However, the Elan’s dynamic range seems much too narrow throughout. The players convey extrovert moments such as op.58’s stormy Allegro impetuoso with due brio, but play far too healthily the hushed markings at the opening and close of the following movement. They also underplay the contrasting dynamics of op.75’s Andante sostenuto and make only half-hearted attempts at realising Onslow’s ‘glissé’ markings, reinforced by specific fingerings, in the same work’s final Allegretto.