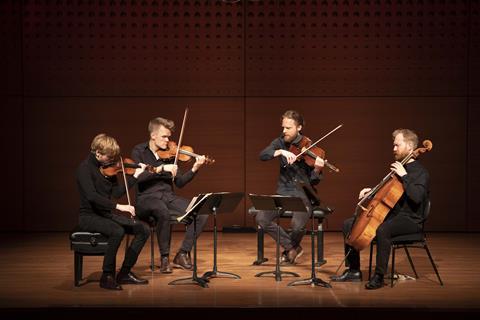 The Danish Quartet presented all of Beethoven’s ‘Rasumovsky’ quartets in one evening at Lincoln Center, and hearing these three particular pieces in one night – and played by an unmatchable quartet – made for quite an evening.

Although many aspects of op.59 no.1 were impressive, two were most notable: the extremely warm and generous playing of Rune Tonsgaard Sørensen (first violin), and the tightly matched articulation of the entire ensemble. Every note was spoken clearly, and the balance between the violins was impeccable. The phrases in the Allegretto were carefully shaped as fragments and also as parts of a larger whole, and the arc of the movement was quite lovely. The Adagio was played with utmost clarity, and even though most of the movement hovered in the piano dynamic, every line was clear and transcendent rather than busy. The final movement was ebullient and joyful, and the transition to the Adagio was extremely sophisticated and elegantly played.

The opening chords of op.59 no.2 were understated, but what followed was exquisite: all of the tricky passagework was played effortlessly and elegantly, with sparkling clarity and astounding ensemble. The slow movement boasted a beautiful ensemble blend and was played with such tenderness and poignancy, but also with simplicity. Silences were powerful but not overly dramatic. The Allegretto was jaunty with hints of nostalgia, followed by a boisterous Finale that brought hooting and cheering from the audience as well as a tremendous standing ovation – after just the first half.

The final ‘Rasumovsky’ quartet did not disappoint and boasted hallmarks of the Danish playing: precision, elegance, balance, beauty and depth. The first movement was toe-tapping fun, filled with character and easily enjoyable; the Andante was graceful and moving. The final movement was given a sparkly start by violist Asbjørn Nørgaard and remained electric until the end.