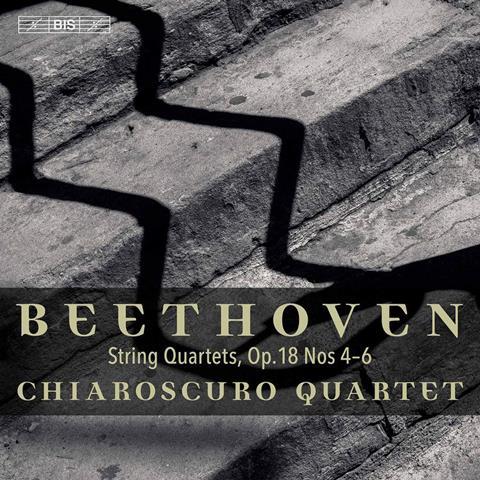 A mere matter of months after its recording of the first three works from Beethoven’s op.18, the Chiaroscuro Quartet follows up with nos.4–6. Julian Haylock enthused about the previous volume in the January issue, remarking on its ‘semantically penetrating and supple world of dazzling light and shade, as befits this remarkable ensemble’s distinctive title’. Nevertheless, the light felt closer the northern light of the leader’s Russia or the violist’s Sweden, rather than the warmer Mediterranean sunshine of the cellist’s and co-violinist’s Spain and France. One might then have predicted that, among this second set of three quartets, the C minor of no.4 might suit these players better than the more buoyant nos.5 and 6.

How wrong that prediction turns out to be. Once again, these are attentive, reactive performances, remarkable for their clarity and the unanimity between the four players. And, while the C minor mood of no.4 finds the players at their best, they’re just as responsive to the more ambivalent Fifth and the exuberance of the Sixth. The variations of no.5’s slow movement display the range of colours they are able to draw from their array of predominantly 18th-century gut-strung instruments. Their pianissimos, too, command attention within a dynamic compass that covers the whole range without ever sounding forced. Vibrato becomes an effect rather than a default. And again, the production – by Andrew Keener, with engineer Fabian Frank, in Bremen’s Sendesaal – comes in close to clarify lines but allows just enough bloom to avoid sounding analytical. A compelling follow-up, and a delicious appetiser for the Chiaroscuro’s op.59.

Watch: Chiaroscuro Quartet: A tribute to our suitcases and British Airways