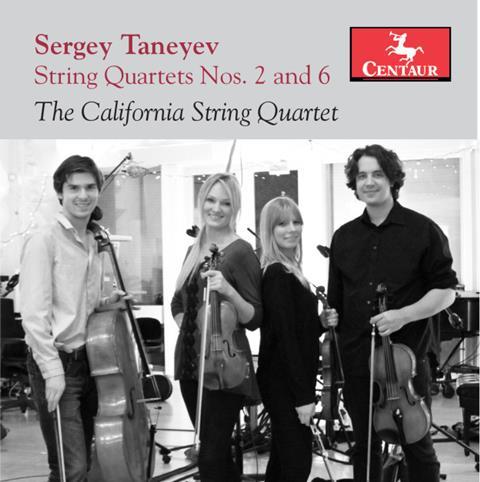 Sergey Taneyev may have lacked the strong creative personality of his teacher Tchaikovsky and his pupils Rachmaninoff and Scriabin yet, like Glazunov, he was a master craftsman who could always fall back on technical ingenuity when the inspiration dried up. Of the two complete quartet cycles currently available on disc, the eponymous Taneyev Quartet’s 1970s series on Northern Flowers possesses a dramatic sweep and edge-of-the-seat spontaneity that imparts a distinctly Russian flavour to the music, while the Carpe Diem Quartet’s Naxos series focus on lyrical intensity, delighting in cross-referencing Beethovenian models.

By comparison, the California Quartet, which benefits from a more open and natural-sounding acoustic, emphasises the Second Quartet’s indebtedness to Brahms and (especially) Dvořák, and even makes the finale’s fugal episode sound convincing – Romantic composers seemingly felt obliged to embrace Beethoven’s contrapuntal obsessions. The musicians also revel in Taneyev’s Mendelssohn-like democratising of the ensemble, creating an invigorating feeling of busyness in the outer movements. The Sixth Quartet is harmonically and thematically more adventurous, most notably in the slow movement’s climactic middle section. The finale’s unexpected juxtaposition of tempos, styles and (at one point) earthy chromatic harmonies is tricky to bring off convincingly, but the Americans segue so naturally between the various elements that one barely notices. JULIAN HAYLOCK