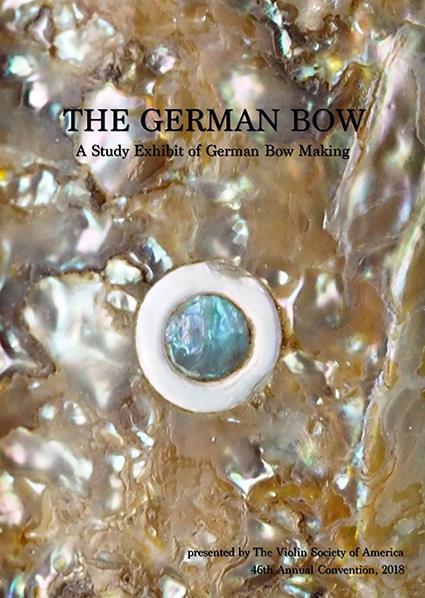 The German Bow: A study exhibit of German bow making

The German Bow: A study exhibit of German bow making

For many years German bow making has been considered the poor cousin to the French school. The reputations of the best German makers were dragged down by the huge number of low-quality trade bows offered in mail-order catalogues and with cheap violin outfits. But in many ways the best German examples are on a par with their French counterparts; indeed, in many price ranges a good German bow is much better value than a comparably priced French example.

There are many books available concerning French bows, but far fewer written about the German school. This book is a fine addition to the rather small area of the shelf dedicated to German work.

The book documents an exhibition of fine German bows that was held at the 2018 convention of the Violin Society of America in Cleveland, Ohio. Curated by long-time dealer, collector and researcher Bruce Babbitt, author of Markneukirchen Violins and Bows, and noted New York bow authority Yung Chin, the exhibition made more than 300 bows available for viewing. A particular criterion for inclusion in the exhibition was that the bows had to be not just interesting historically, and beautiful, but that they had to be good playing bows. The book documents around 230 works from the exhibition, with 20 extra bows thrown in which were not shown but came to light later. Babbitt told me the book was such a special opportunity to publish that he wanted to include these noteworthy extra examples.

The photography is excellent throughout, with the lighting and presentation being very consistent. For most bows there are the classic mugshots of head and frog, with large-magnification pictures of the brand stamps. My very slight quibble as a bow maker is that it would have been nice to know how much each bow has been enlarged in order to make the format so consistent.

The book does not include detailed information on the makers; that is left to Klaus Grünke’s definitive book German Bow Makers. There are a few pictures of some of the makers themselves, family trees of the larger dynasties, and some interesting pages from commercial catalogues, but the book is intended more as a record of the exhibition than as a new authoritative historical reference. However, it will be invaluable for many. As one shop owner said: ‘I love looking at French bows and French bow books, but those are the kinds of bows I see every day.’ Thus the book will quickly prove its value to most shops, particularly given its very reasonable price. In addition, the clean design and well-thought-out format make it attractive to any musician, collector or connoisseur with an interest in bows.