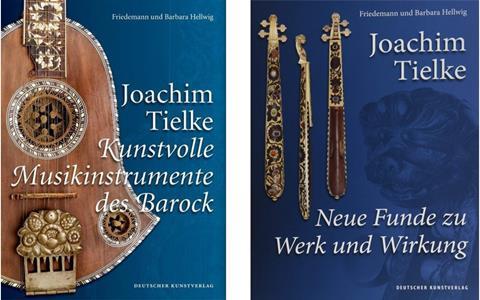 Published in 2011, Joachim Tielke: Kunstvolle Musikinstrumente des Barock (‘Ornate musical instruments of the Baroque’) by Friedemann and Barbara Hellwig is a reworking and continuation of Günther Hellwig’s 1980 German-language work Joachim Tielke: Ein Hamburger Lauten und Violenmacher der Barockzeit (‘A Hamburg lute and violin maker of the Baroque era’). A decade later, this text has been brought to the fore with the release of a short follow-on volume, Joachim Tielke: Neue Funde zu Werk und Wirkung (‘New discoveries about his work and its effect’), which documents five newly identified instruments accompanied by updated scholarship. These rich volumes are beautifully illustrated with high-quality photos, creating two books worthy of ‘coffee-table’ status as well as being important contributions to scholarship.

Musical instruments are as much about their visual appearance as they are their sound. We design instruments to be attractive, decorative objects that delight observers even when silent. Instruments need to catch the eye of potential customers in order to be commercially viable in an increasingly crowded marketplace. The bowed and plucked stringed instruments from the Hamburg workshop of Joachim Tielke (1641–1719) captures this essence through a large number of surviving instruments, often exquisitely finished in the latest fashions of their day. Tielke produced the main instruments in use at the time, including lutes, guitars, bell citterns, violins and viols, as well as less common instruments like the early wire-strung viola d’amore, the dancing master’s pochette (or kit) violin, and the baryton. It is this sheer volume of largely intact instruments, and their very distinctive designs, that have drawn the attention of many musicians and scholars.

The first book is divided into four sections, starting with the life and work of Joachim. A brief history of the Tielke family is followed by discussion of the organisation of the Tielke workshop, and is a fascinating insight into the complexities of a manufacturing trade often obscured and romanticised by a single maker’s name. Further valuable information is provided on possible students of Tielke who used his designs after his death; his labels and how they evolved over his career; and the intricate decoration Tielke’s work is most known for, all being information that will be most valued by curators, auctioneers and scholars alike.

Part two serves as an extensive compendium of the 169 instruments and fragments identified from the Tielke workshop (at the time of publication), being 34 more than originally collated by Günther Hellwig in 1980. Organised by instrument types, this book brings instruments together from disparate collections, allowing side-by-side comparison of analysis and physical attributes. What is most startling is the different permutations of designs in use by the workshop, while all strongly pertaining to what we now recognise as characteristically Tielke. The workshop’s output serves as a model in marquetry skills, combining the visual and auditory arts in instruments that were destined for some of the wealthiest clients of the era. The examinations of the instruments are treasure-troves of data for anyone working with stringed instruments of this time, many entries including useful measurements and commentary. The remaining two sections of the book consist of appendices detailing the work of related makers, such as Joachim’s brother Gottfried, and a register of instruments and their locations at the time of publication.

Since the publication of the first volume, a few additional instruments have appeared on the book’s website, available as printoffs for those wishing to augment the book they had purchased. It was therefore welcome when these newly discovered items were formally inducted to the Tielke catalogue by the publication of a follow-on volume in 2020. This thin but important annex to the original volume provides entries for a further five instruments, bringing the total number of instruments and fragments documented by the Hellwigs to 174. In addition, three lengthy chapters on dendrochronology, originally published in 2018, have been updated and republished in this volume, creating a near-complete consideration of Tielke’s instruments and legacy to date.

While it would now be most welcome to see these books as a single volume translated into English (which would undoubtedly improve accessibility to these valuable scholarly assets), at present the two volumes are a must-have for anyone interested in Baroque stringed instruments, and a credit to the expertise and dedication of Friedemann and Barbara Hellwig.