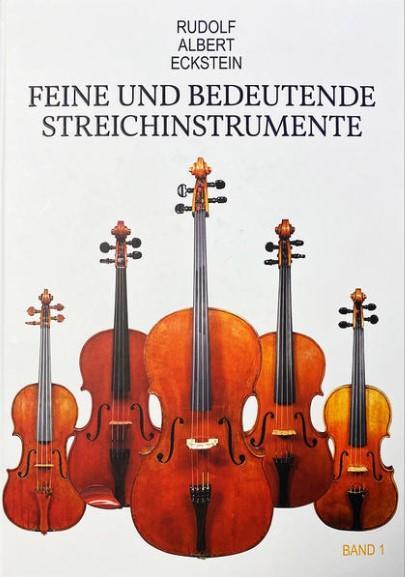 These days, the general trend in violin books tends towards hyper-specialised publications which focus on a very particular maker, or a narrow school. Often, the best books are those that show the most typical examples of a maker’s work. While this presents an ‘ideal’, it runs the risk of propagating a very insular view of the capacity and mindset of different makers, and it can narrow the focus in a way that is unrealistic within the broader realities of studying the violins of centuries past. With this in mind, I found this new book deeply stimulating, although in ways that may not be altogether obvious. It is an autobiographical chronicle of the instruments that Rudolf Eckstein has enjoyed and sold over a 30-year period. With text in both German and English, it gives the sensation of experiencing a connoisseur’s-ear survey of instruments that had been picked out for their musical success, rather than the usual curator’s-eye view which governs most new publications.

There is a fair inclusion of the usual suspects – Rogeri, Testore, Gagliano, and Vuillaume, and these are helpful to draw the eye back to the kind of instrument we see more regularly across the literature of the violin, but the overwhelming majority of instruments are Italian from the early-to-middle part of the 20th century. Internal details, where they appear, prove extremely helpful. I would not, for example, have known what to make of Paolo de Barbieri’s mid-20th-century work, had I not seen pictures of the wraparound linings passing over the corner-blocks in the example illustrated. I may have assumed, incorrectly, it was something Hungarian. There are many small details like this, and they all go a long way to justify this book on my shelf.

I can’t review this without being cautiously critical of the photography. In fairness, 30 years ago or even 10 years ago we weren’t able to make photos the way we see on a monthly basis in The Strad without going to great expense, and it would be a vast undertaking to bring in all of these instruments to be re-photographed. There are issues with lighting, angles and digital cropping, and the occasional pixellated image. However, this is far from being the only book with these problems. I would not recommend this book as a first step towards understanding 20th-century Italian instruments, but the more that I return to it with a strong foundation of knowledge, the more I have come to be grateful for it, and the more I find it an invaluable critique of this difficult sub-discipline of violin expertise.