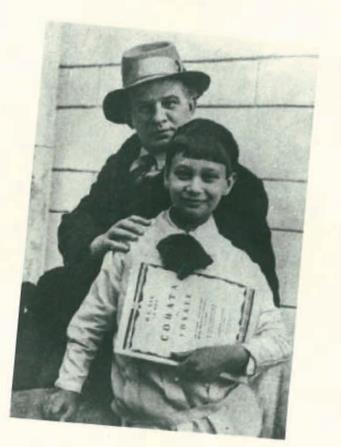 Abram Yampolsky with a star pupil in 1933

There are different opinions about the importance of studies in teaching the violin. Some teachers swear by them, but others steer clear of them completely. There are some studies, however, that are undeniably necessary for the attainment of a sound, reliable virtuoso technique. The ‘virtuoso variations’ on the studies of Rodolphe Kreutzer written by the Russian Abram Yampolsky, one of the greatest violin pedagogues of all time, are among them. The piece included in this month’s magazine is Yampolsky’s Virtuoso Variation on Kreutzer’s Étude-Caprice no.27.

With its 3rds, 6ths, octaves, fingered octaves and 10ths in many different permutations, it is certainly one of the most important studies for practising double-stopping. Unlike some other studies, which sometimes deal with problems that rarely or never appear in the violin concert repertoire, this virtuoso variation covers technical issues that are present, to greater or lesser extent, throughout the repertoire. Working on this study, therefore, can have an immediate and positive influence on your playing. Furthermore, some excerpts from the study can be used at any point in a violinist’s career to polish technique and to clean up intonation. 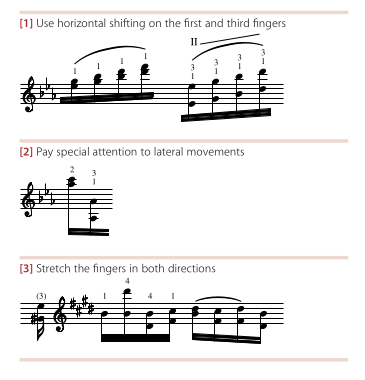 Two particularly useful sections for this kind of work are the beginning of the study up to the first passage of broken chords (bars 1–27) or, if you are pressed for time, just the last ten bars of the study. Yampolsky’s suggestion for practising was simply a short instruction at the bottom of the page: ‘Study [the piece] legato and practise separately in a slow tempo.’ To make practising more interesting and to get the best results, some additional guidelines might be useful. As the simplest way of studying 3rds and fingered octaves I would recommend establishing a framework with horizontal shifting on the first and third fingers (see example 1).

Afterwards the correct vertical movements of the second and fourth fingers can be defined with slow trills and then added to build up the whole passage. The numerous string changes should be practised separately with changes of position on the middle string common to both double-stops. Lateral movements will require special attention, especially when they are linked to a shift (see example 2).

For playing the 10ths, I would follow a piece of advice from Yampolsky himself, related to me by his student Igor Bezrodny: when playing and practising, divide and imagine the notes in short groups. In figurations such as example 3, it is clearly impossible to follow the old rule of stretching from the 4th finger downwards. Instead, follow Galamian’s advice to place the hand in an intermediate position and stretch in both directions. Perfecting intonation is, of course, a lifelong task.

There is no better way of achieving this goal than playing double-stops with both fingers on the strings but sounding only one line of notes – first the upper, then the lower – and trying to get as close as possible to the ideal intonation and sound. I would not complicate this study with complex bowings. To Yampolsky’s original suggestion for legato and detaché I would only add a broad spiccato in the lower parts of the bow.