Ruth Hallows speaks to violinist Maja Horvat, who shares her experiences of pre-performance nerves and how the pandemic has had an effect on staying calm 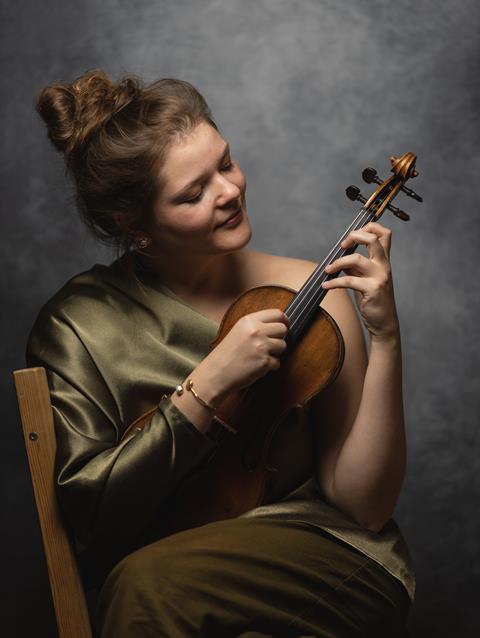 Experiencing nerves or anxiety in the run up to a performance or even during, is something most performers face during their careers. Slovenian violinist Maja Horvat has performed all over the world in many different settings, from chamber concerts with her quartet, the Brompton Quartet, to the high-pressured environment of international competitions. But after a two-year global hiatus, how has Horvat embraced the return to live performance and the nerves that come with it?

‘It’s all about perspective’ Maja says. ‘In the run up to a performance, I am super excited. I try to put into perspective what the performance means to me. This doesn’t mean ranking one performance being more important than another but instead working out how stressed I could get depending on who is in the audience, the space, things like that and deciding how important those factors are.’

A finalist in the Young Classical Artists Trust (YCAT) auditions earlier this month, Maja describes her preparation on the morning of the final held at Wigmore Hall. ‘I like to spread everything out throughout the day and not rush. I’d planned a lie in (which obviously didn’t happen because I was so nervous) and had a last-minute scramble to find everything I needed. I didn’t want to pack early because I knew then I’d just be sitting there looking at it and I practised for maybe ten minutes that day.’

How much practice to do on concert day is a topic that divides many musicians, with some using practice as a calming mechanism. However, Maja firmly believes that not practising much beforehand is essential for her nerves. ‘I don’t like playing on the day’ Horvat explains. ‘It creates problems that do not exist. I would stare at the page and think, “oh that looks difficult. I’ve never had problems with it before, but it seems hard – I should practise this!” And then I’ve created a problem.’

Maja’s nerves manifest in bow shakes but she’s worked out a number of manoeuvres to keep them from disturbing the music. ‘It’s the beginning of slow, quiet phrases where the bow shakes can be most problematic. Sometimes I squeeze my arm into my body for support because what you don’t want to start thinking is “what bowing should I do here to avoid shakes?” – you don’t want it to take away from the phrasing of the piece.’

When live performances returned after the pandemic; Maja experienced an interesting addition to her bow shakes that coincided with the loan of a beautiful new violin. ‘I had this crazy feeling that I was going to drop my violin if I did a shift. I felt like I didn’t know how to properly hold my instrument. I think it was to do with my shoulders or neck getting tight but thankfully that went after a few performances.’

With a concert diary now resembling the fullness of pre-pandemic times, Maja has found that labelling her adrenaline as excitement rather than nervousness is fundamental to performing under pressure. ‘Consciously I know that I have nothing to worry about. I know I can play the violin and that both my fingers and my brain know the repertoire. The worst that can happen is that I make a mistake, or I miss a shift or something. If that happens, I just move on, no one died.’