The German–Canadian cellist Johannes Moser embraces experimentation. He talks to Peter Quantrill about channelling his inner Jimi Hendrix and exploring the sound of the electric cello which, alongside the conventional cello, features in his latest recordings for Platoon 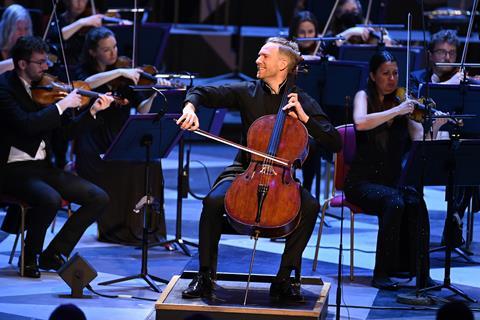 Late last summer I found myself somewhere familiar yet foreign: Platoon 7 is a brand new recording studio in London’s King’s Cross run by Platoon, a global artist services company. I was admitted mid-session, and sat minding my own business while the producers shuttled between banks of kit. On the other side of the glass, the cellist Johannes Moser added bar after bar and layer after layer to his new multitracked album Alone Together,  alternating between his 1694 Andrea Guarneri and a Ned Steinberger electric cello festooned with ports and wires. Six commissioned new pieces sit beside multitracked arrangements of string classics: Arvo Pärt’s Fratres,  Klengel’s Hymnus  and Casals’s Song of the Birds  among them.

Alone Together  was conceived and recorded to take full advantage of spatial audio, an immersive, hitherto almost exclusively cinematic effect that creates the impression of sound moving around the listener in three dimensions. The experience is at once vividly naturalistic and yet unsettling, like the dual identity of the electric cello behind the glass. Here, at least, the 42-year-old Moser can call upon decades of experience unmatched by his colleagues.

As he explains on a subsequent Zoom call, Moser first encountered the – or an – electric cello during his studies with David Geringas. Yamaha had sent the Lithuanian cellist a model to try out, but Geringas wasn’t interested. It lay there in a box until Moser walked off with it one day and began experimenting, ‘pretending I was Jimi Hendrix or something’. What did Geringas think about that? ‘I don’t know, I didn’t ask him – I just took it!’ After a while Moser acquired his own model and began taking it more seriously, fired by the intersection of ‘my fascination with technology and my love of the cello’. He compares the electric cello to a sandbox game: ‘a musical playground I can develop and float in without needing to strive for unattainable perfection’

’Can you take celloism out of the cello and just use cello technique on an instrument that offers a completely different array of possibilities? I don’t have the answer to that yet’

The Los Angeles Philharmonic agreed to commission a concerto for the instrument if Moser could find the right composer. He hit the bullseye with the Mexican composer Enrico Chapela (b.1974), and the ensuing Magnetar  (2011) became a showcase both for the instrument itself and for Moser at a pivotal stage of his career. He gave more than 30 performances of the concerto over the next few years, at least one of which is available on YouTube (bit.ly/3Md3fAm). Moser sits on stage as usual with the diminutive, viol-sized instrument, the novelty of which is somewhat dwarfed by the large speaker and box of tricks (well, open laptop) by his side. Magnetar  itself, however, sustains the architectural span of a relatively traditional 23-minute, three-section work with a remarkable strength, criss-crossing fluently between Stravinskian savagery and wa-wa blues.

‘Part of its success,’ acknowledges Moser, ‘aside from being extremely entertaining in its own right, lies in the novelty that very few other pieces have so far been written for electric cello and orchestra. I would feel it was even more successful if another cellist picked it up. The most successful of Rostropovich’s commissions were the ones he decided to perform over and over again. The Shostakovich, Britten, Prokofiev concertos have entered the repertoire, and to a lesser extent the Lutosławski and Dutilleux. But how often do you hear Jolivet’s Second Concerto?’