The following is an extract from Mimi Zweig’s larger feature on ‘First Lessons’ in The Strad’s March 2013 issue. Click here to subscribe and login. Alternatively, download on desktop computer or through The Strad App. 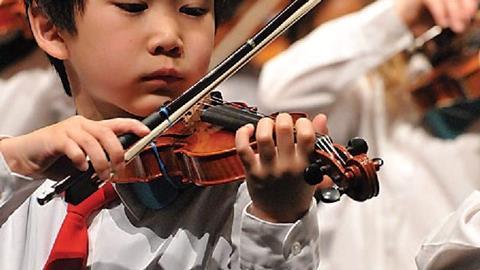 We introduce the bow by week three or four, and as with the left-hand set-up, we gently guide the student’s physical motions. The right hand will find a natural position if all the joints are flexible and the tendons fluid. Tapping the first finger, two middle fingers and pinky keeps the fingers from gripping the bow – I always use the terms ‘bow position’ or ‘balance’ and not ‘grip’. We begin with the thumb under the frog (Á  la Suzuki) but by O Come Little Children – the fourth work in the Suzuki repertoire, where students begin to use the whole bow – the thumb is placed in its normal position. We have found that this initial position works well because at a young age, a child’s small-motor coordination is not yet fully developed. The danger is to leave the thumb under the frog for too long – old habits are difficult to break.

A middle mark is placed on the bow, acting as an important geographical reference. From the beginning, the basic bow strokes martelé, détaché and legato are introduced and clearly defined. Playing in the upper half of the bow gives a young violinist an understanding of the release of the forearm, guaranteeing a straight bow. The AEA Song (below) is played with the bow using the martelé stroke in the upper half, crossing strings by changing the arm level from the ball-and-socket joint.

The legato and détaché strokes are introduced with See Saw (below).

Then I move on to the variations on Twinkle Twinkle Little Star from Suzuki Book One, with each variation played in the upper half of the bow, using all three strokes – (the semiquavers are played détaché and the quavers martelé).

For me, martelé is the fundamental stroke on which a good bow arm is based. The hair of the bow establishes a relationship with the string, pulling it down on the down bow from the left side of the string, and pushing it from the right side on the up bow, using the weight of the arm and relaxed fingers. (I think the French got it right with tirez [pull] and poussez [push] to describe down and up bows.) Sometimes it is helpful for students to feel that the violin is pushing up against the hair of the bow. This creates a richer, more beautiful tone with no additional effort.

Read: When should a child start learning a stringed instrument?

This article was published as part of Mimi Zweig’s larger feature on ‘First Lessons’ in The Strad’s March 2013 issue. Click here to subscribe and login. Alternatively, download on desktop computer or through The Strad App.