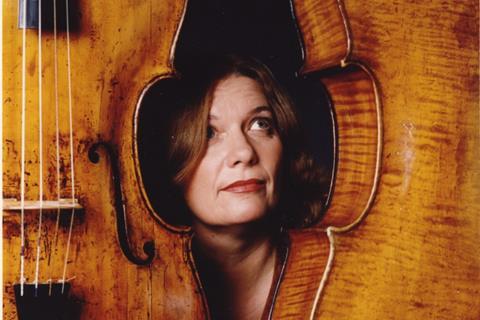 When did you first experience problems with your shoulder? In February 2005 I developed a pain in the front of my right shoulder that was so severe that I had to miss a concert. I went to a physiotherapist and was given a series of exercises and told to go to Pilates classes. The shoulder improved enough to allow me to play but the pain was still constant. It felt like a burning sensation down the front of my arm, starting in front of the humerus head – typical acute tendinitis. The pain prevented abduction of the arm, meaning that I could only use a few inches of bow at the heel and couldn’t produce much volume.

I had already experienced Alexander Technique, but a friend recommended a particular teacher, so I had lessons with her, which helped. The teacher had a lot of ‘direction’ in her hands which means that, as a pupil, you can feel the results of the work strongly as it is applied. I had always wanted to train as an Alexander Technique teacher and this made me decide to do it.

Did the condition improve during your training?

The course certainly helped, but it didn’t get rid of the problem. In the summer of 2006 I went back to the physiotherapist and my shoulder improved with a course of laser and ultrasound treatment. My therapist told me that there are bony spurs (calcium deposits) around my shoulder joint, which are probably my body’s defence against what I am doing with my bow arm. She said the spurs could be removed with surgery, but the thought of an operation filled me with horror.

My arm continued to improve slowly during the second year of my training but I was always afraid that it might flare up again. My GP referred me to a surgeon who gave me a steroid injection, which cured the pain long enough for me to get through a three-week American tour. But the pain returned afterwards, and I eventually decided to have the operation to remove the calcium deposits from the shoulder joint.

Was the operation successful?

No, it was hopeless. I had expected the recovery to take a while, but the pain continued for months – I was no better off than before. A different, private surgeon gave me another steroid injection and also showed me a helpful exercise that stretches the muscles around the back of the shoulder. He recommended another course of treatment with my physiotherapist, but after six sessions, she said there was nothing more she could do.

I devised my own exercise regime based on Alexander principles, and kept a diary on my progress. Every morning I would spend half an hour lying down in semi-supine position (on my back with books under my head and feet flat on the floor, so that the knees are up). This is a normal Alexander procedure. During this time, one thinks ‘directions’ to oneself. The basic directions are: ‘Allow the neck to be free, to allow the head to go forward and up, to allow the back to lengthen and widen, to allow the knees and elbows out and away.’ The directions help to prevent tensions. One morning during our US tour this February, I woke up to find that the pain had almost gone. I have heard that shoulder problems often do get better suddenly after a period of one to eight years. At first the pain came and went, so I can’t pinpoint when it went for good.

How has life changed as a result of your experience?

I make sure that I spend time working on myself every day, no matter how busy I am, otherwise I feel the pain coming back. I apply Alexander principles to my movements as much of the time as possible. The first principle is called ‘Inhibition’. This means that you stop what you are doing in order to think. What you are doing might be a long series of individual steps, such as walking towards the instrument, undoing the catches on the case, opening it up, removing the bow, screwing up the hair, taking out the instrument, picking it up, walking towards the chair and sitting down.

You practise by stopping in between each step to think of the ‘Means Whereby’ you might carry out the step: this is the second principle. It consists of applying the directions mentioned earlier and then working out how the movement is to be made. The third principle is ‘Direction’. One makes the movement, simultaneously maintaining the directions mentioned previously – but in a more complex way.

What would you advise someone with a similar problem?

You have to take action as soon as possible. Alexander Technique can’t remove a calcium deposit but it can help you to improve the way you use yourself. I wouldn’t be without it.

This article was first published in The Strad's December 2009 issue