A learned crowd: Postcard from Cambridge

The Cambridge Music Festival marked its 30th anniversary in the unusual format of two instalments during 2021. Toby Deller attended three performances during the autumn celebrations 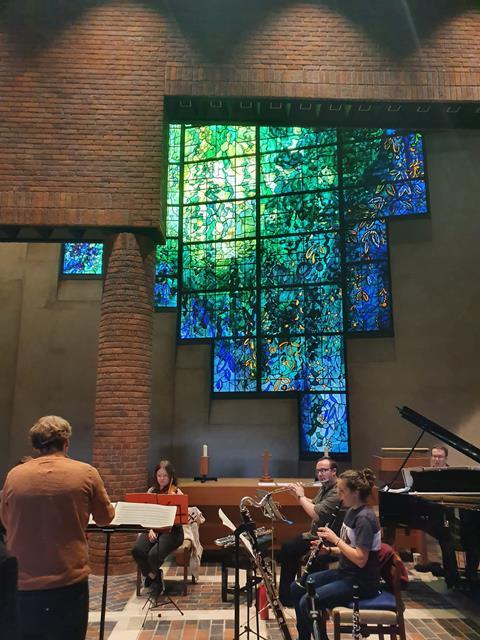 Next ensemble in Robinson College chapel

Opened to students for the first time in 1977, Robinson College is one of the newest of the Cambridge colleges. Its red-brick facade runs along a residential street, giving little hint of the landscaped gardens within, for which the college buildings form an architecturally distinctive terraced backdrop. There is even an outdoor theatre, not that there was any chance of that being required on the drizzly October night of my visit to the 2021 Cambridge Music Festival (CMF). Instead, it was the college chapel that made a fine venue for a performance of Gérard Grisey’s Vortex temporum.

Unlike the more famous Cambridge chapels, with their naves and oppositional seating, this one has a lateral orientation. The congregation (or audience) sits in elongated semicircular rows facing an altar positioned on one of its long walls, much as you would find in a concert hall. A stained-glass window, designed for the college by the 20th-century British artist John Piper, gives the calm space a modern-art touch.

It is in front of this window that the performers sat: members of Next, a year-long training programme in contemporary music and career-building for Royal Birmingham Conservatoire (RBC) students as well as for postgraduates and recent graduates from other UK and European institutions, run by the Birmingham Contemporary Music Group and RBC. The string players involved were violinist Olivia Jago, violist Cameron Howe and cellist Carwyn Jones.

Conducted by William Cole, the six players traversed with skill the 40 minutes of extended techniques and arresting sonic gestures and patterns – pianist Joe Howson deserved his half-suppressed smile of achievement on letting go of the last notes of the piece’s final, subdued interlude. As for the audience (there were no spare seats), they were certainly appreciative. Many would have been associated with the university music faculty, a significant constituency of academics, students and potential professional musicians that the CMF box office can look to for support, as well as a more general music-loving public. It added up to a festival audience that, in the words of festival director Justin Lee, ‘does not behave like a festival audience’ in that it’s less inclined, broadly speaking, to attend festival concerts in a spirit of local pride or because they are rare.

‘When I look at Cambridge,’ he says, ‘I see a small city, but it has a huge cultural life. That’s for a whole number of reasons. You’ve got two universities. Within the old University of Cambridge you have 31 colleges, many of which have their independent musical lives, whether it’s through a chapel, a music society for students or a music society that brings in professional artists for concerts. Each of these colleges is trying to promote itself as a nice place to be. As a result, the level of activity is quite high and there are lots of opportunities for people to be invited in but also for students to give their own concerts. You’ve also got the university musical society, which involves about 500 musicians, and they aren’t all studying music. Because it’s a relatively educated population in the city, many will have had some experience of making music through local choirs and orchestras. You have professional groups too: Britten Sinfonia, the Academy of Ancient Music, some of the better college choirs…’

He sees his festival director role as supplementing that background activity, rather than concocting his own artistic vision and attempting to sell it. ‘I do see myself more as a promoter than as a curator – I’m not sure I like the word “curator”, but it’s the word people use. Yes, I’m putting stuff together and sometimes I’m talking to artists about new things. But often it’s just a case of: I think this is worth hearing. Let’s see if we can make this work, and where would be the best place for it?’

Hence the choice of Robinson College chapel. Many of the other 2021 concerts took place at the West Road Concert Hall, which – located just outside the main city centre within the university’s Faculty of Music – not only is in the same vicinity as Robinson College but, having been built in 1978, is of the same vintage too. In a normal year, Lee would have used some of the landmark chapels and other venues around the city. Planning around Covid-19 uncertainty, however, meant that this was not practical, as the dates of the festival, which was initially scheduled for November 2020, kept shifting.

In the end, CMF settled on a hybrid festival/concert series set-up for what was its 30th season, testing the water with half a dozen live events in June 2021 before a more substantial tranche in the autumn. Appearing in each of the two instalments was the London-based string group 12 Ensemble, although they numbered 20 when they came in November for their second programme, featuring music by Max Richter. The centrepiece was his Four Seasons Recomposed (2012) with Eloisa-Fleur Thom, one of the group’s artistic directors, as solo violinist. It’s the kind of programme that appeals to Lee, since both composer and performers have a following among a broad audience.

‘Generally, what I want, as a promoter, is a “headline”,’ he explained over lunch the following day. ‘Last night with 12 Ensemble, it was Max Richter; in the summer it was Shostakovich’s Chamber Symphony. It’s not that I don’t want people to listen to the other things, but it helps to have a focal point: either an artist or a composer or a piece of music. You have to be clear on that to get the message across because people tend to make quick, instinctive decisions, and somehow you have to press the right button.’ 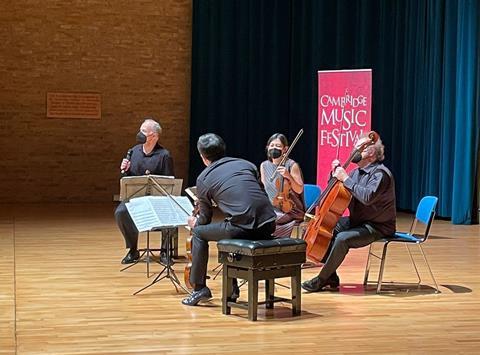 A Cambridge homecoming for the Takács Quartet

The ensemble had ended their programme with the much shorter, much more intimate On the Nature of Daylight (2003). Although this is arguably Richter’s most widely recognised music, it perhaps went against convention to finish with a work requiring only a quarter of the total ensemble. The fact, however, that the other players took the time and trouble to depart the stage served to emphasise that the piece was not an afterthought, but was intended as six or seven minutes of serious reflection after Richter’s playful take on Vivaldi.

In any case, Lee was very happy to tinker with formats, the customary concert interval being a particular target, for reasons partly artistic and partly practical, surrounding timings and the logistics of running a bar in ill-equipped settings. ‘I quite like the idea of a single arc, musically.’ And so it was that, nine days later and at Lee’s request, the Takács Quartet presented a full recital of Haydn op.20 no.5, Janáček’s ‘Intimate Letters’, then Beethoven’s op.132 with only a few minutes’ breather before it. Their ‘Heiliger Dankgesang’ was simply thankful rather than overdone in its piety.

They played masked throughout, too, and by choice, aware that it would be a big audience coming to hear them and that the West Road auditorium leaves little separation between players and public. The masks, however, did not prevent first violinist Edward Dusinberre, microphone in hand, from making some introductions and revealing that the concert was a little homecoming for him. The British violinist, along with his family, had moved to Cambridge as a child not long after the hall’s completion; he recalled school concerts there, paying tribute not only to his music teacher at Chesterton Community College but to the work of music educators generally. If the noises of approval in the auditorium were anything to go by, the CMF audience, however atypical, certainly does cherish its own musical education.