You weren't aware of him or of yourself. The focus was entirely on what you were doing' 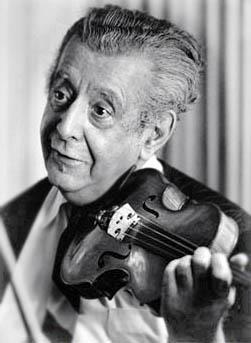 In the March issue of The Strad, violin teacher Pauline Scott, recently retired from Guildhall School of Music and Drama in London, answers questions on her techniques for our Ask the Teacher feature. When we interviewed her she also remembered the patience and discipline she received from the legendary pedagogue Ivan Galamian

‘I studied with Galamian for five years. I auditioned and hadn’t a clue what I was getting into, but when he heard me he said, “You’re very musical, but you have no technique.” I said “I know.” Before then I’d done everything instinctively – I started quite late, at eleven, and had no musical background. I did a lot of quartets at college, but my playing was intuitive and that’s when you start having problems.
When I went to Galamian, at Juilliard, the atmosphere in New York was so energised – nobody needed to tell you to practise. I started with scales and Kreutzer studies and spent two months on that. He was insistent about bowing technique. In England at that time there was a lot done on the left hand but not so much on the bowing arm. I was getting very tight so we started at square one.

To begin with I didn’t know what was happening; I just did what he said. We had a lot of scales. It wasn’t a question of having to be complex or fancy or fast: it was all about listening to the sound, organising the bow, the importance of the contact between the bowing arm, the bow and the string. So many people play with a lot of pressure, which kills the sound. His priority was to develop what he called “the springs”, in order to become more sensitive and aware of the actual contact of the bow on the string, to get the best resonance. It wasn’t a question of loud or soft: it had to be like a bell – you had to get that clarity. A lot of it was the balance of the arm, using weight rather than pressure – pressure can be added. You had to know what you were doing and have absolute control over the sound so you could play lyrically and legato without bulging. So much of the work was about getting this mastery of the tonal quality, being in control mentally. He’d spend a long time on things. Nothing was short term.

His teaching was methodical: his principles were logical and simple, but the execution took a lot of painstaking work. His patience was amazing: he was in no hurry. You might practise very hard, but you would be on something as long as it took to do what he felt was needed. The other thing that struck me was that he wasn’t a ‘personality’. You weren’t aware of him or of yourself. The focus was entirely on what you were doing. Usually you’re very aware of a teacher’s presence, but with him it was pure focus. It was a long procedure of being mentally focused and calm, but intense – a balance of having time but working mentally.

He’d ask for Bach every lesson, because Bach has to have perfect intonation, rhythmic stability and a sense of construction, which needs a lot of discipline and work. We went through all the studies, from Kreutzer to Paganini, every single one, and mainly concerto repertoire more than sonata repertoire. You always knew Galamian was supporting you. I worked very hard: I was so motivated that there was no stopping me, even when I didn’t know what I was doing. And gradually I understood what was happening.

Later I got to know Galamian well and he and his wife were very kind to me, but in a lesson you’d go in and you’d not waste one second. There was hardly any conversation and yet he knew all about one. He knew my character intuitively. Everything he did was unspectacular. He’d teach every day, seven days a week, 8am until 6pm, apart from Christmas Day, and we’d have a party on New Year’s Day. It was all about consistency. He was kind to everyone, but if one was not totally committed he wasn’t bothered. I remember one concert where someone was playing Chausson, but Galamian was furious because the player didn’t play how Galamian had indicated, and you had to do it the way he wanted. Rubato, fingering – his argument was, “You do it my way and then you can do it how you want.” Whatever he wanted, it was for a reason, so one learnt. This wouldn’t go down very well these days but it was good discipline.

He wasn’t a very exciting player himself, but he knew the repertoire off by heart – all the studies and concertos. He could play everything, but he wasn’t an inspirational performer. He was a practical man: he wasn’t interested in histrionics. And yet, the talent of the people who were there at the time was incredible – Itzhak Perlman, Pinchas Zukerman, Kyung Wha Chung. The first time I got to know them all was in Meadowmount in 1965. Hearing those people could have put you off, but I found it so exciting. In the UK at that time there weren’t really great players. The people one admired were of a different generation and this was the first time the violinists I admired were my age. I would never be a Zukerman or a Perlman, but it inspired me. The whole atmosphere was of rigour and great joy. There was no reason not to play those virtuoso pieces – it was just a question of application. When you see all that happening and you watch the sheer energy and work you think, “Why not?”, which is wonderful.