Child pan pipers involved in series of Maastricht concerts in in 2015 worked beyond allowable hours – but were not employed by Rieu, court conceeds 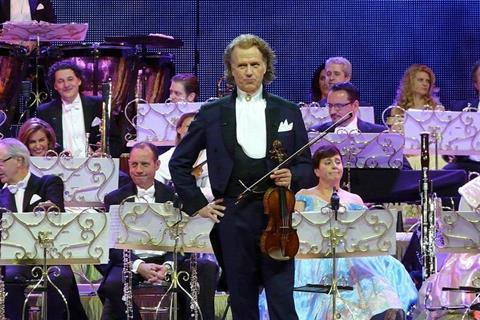 Violinist André Rieu’s production company has successfully contested a fine of €116,000 ($137,000) imposed by Dutch authorities after a series of concerts in Maastricht in 2015 failed to abide by strict child employment laws. The original fine of €236,000 was reduced but remained ‘absurdly high and disproportionate’ according to Rieu’s lawyer.

The fine related to the appearance of Romanian pan flute player Gheorghe Zamfir’s troupe of young dancers and musicians who, according to employment law in the Netherlands, should not have participated in a live performance beyond 11pm, while the Rieu concerts finished at midnight.

Rieu contested the fine on the grounds that the minors were not employed by him directly but rather by Zamfir, and in any case were involved in the performance before 11pm and only invited on stage after that for the curtain calls. Rieu’s side reportedly also complained that since authorities were aware of the infraction, they could have brought it to the attention of the production company before it was repeated over seven nights.