A Scottish fiddle, thought to be played by the Bard, more than 250 years ago, is to go on a three-week concert tour 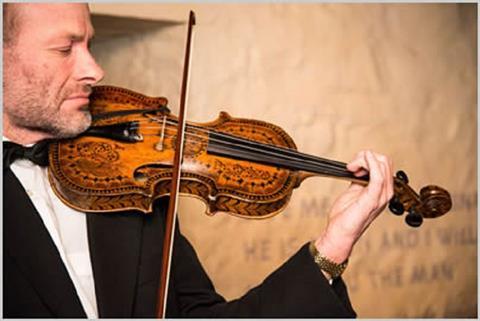 A fiddle thought to be played by Robert Burns at his dance classes over 250 years ago is to go on a three week concert tour of the United States. The violin was owned by the Scottish poet’s dance teacher, William Gregg, who played it during dance lessons at the Bachelors’ Club in Tarbolton, Ayrshire.

Recently restored, the instrument is generally on display in a glass case at the Burns Birthplace Museum in Alloway; the only person normally allowed to play it is violinist Alistair McCulloch, a traditional music tutor at the Royal Conservatoire of Scotland in Glasgow.

Now, to celebrate the 20th anniversary of the National Trust for Scotland Foundation USA, which raises money for heritage and conservation projects at the charity’s properties here, McCulloch is planning to take the fiddle on a tour of the United States, visiting cities including Chicago, Boston, Los Angeles and Washington, later this month.

According to McCulloch, it could not be proved that Burns played the fiddle himself but that there was a ‘good chance that he did’ given that he knew how to play it and that he would often find himself in the same room as it at the club.

The Gregg violin, McCulloch told The Scotsman, ‘is a very powerful instrument to play given the Burns connection and people really get into it. There is a huge interest in it and there is usually a deadly silence when you start to play it.’ He continued: ‘Around three years ago, it was restored as it was in grave danger of cracking quite badly and it was restored to its Baroque state by violin maker David Rattray. It is well over an inch shorter than a standard violin which makes it quite tricky to play, I will admit that.’

Restored locally before it came into the possession of Wallace Galbraith, a violin teacher in Ayrshire who was also Mr McCulloch’s first tutor, the violin ended up in the hands of the National Trust for Scotland, which runs the Burns Birthplace Museum in Alloway. 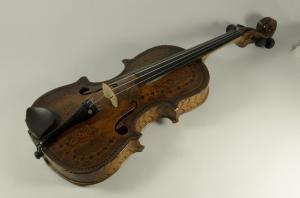 The Gregg fiddle ‘is very ornate’

McCulloch, who likes to play music of the time on the violin, will perform pieces including Lea Rig, Mary Morrison and a Neil Gow tune Major Graham of Inchbrakie during his tour of America. He will also be playing with the US violinist Rachel Barton Pine.

‘The fiddle does have quite a sweet sound and it is very ornate,’ said McCulloch. ‘It is quite a thing to look at.’