Name the maker: a cello by Dominico Montagnana, Venice, 1735 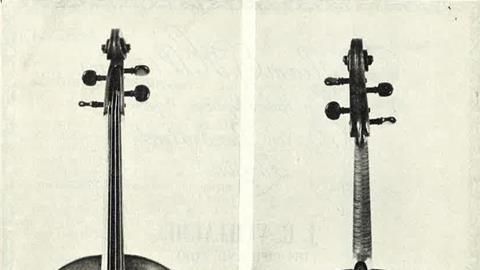 This illustration of a cello by Dominico Montagnana was published in The Strad, June 1972. The following text is extracted from an article accompanying the photographs:

Dominicus Montagnana is justly considered to have been the finest of the many talented luthiers who worked in Venice during the first half of the eighteenth century. He was born about 1690 and died some time after 17580. It is doubtful whether his reputation would be so great were it not for the many remarkable violoncellos which he constructed to provie instruments which are now the treasured possessions of many of the world’s greatest cellists.

Very little information regarding Montagnana’s life has been discovered. It was formerly believed that he had been a pupil of apprentice of either Amati or Stradivari, and to have worked for a time at Cremona before settling in Vcnice. There is not a shred of evidence to connect Montagnana with Stradivari other than the fact he adopted the names of ‘Cremona’ as the sign of his house.

Possibly one of the reasons why less is known about Montagnana than any other of the great makers is that for many years his instruments, including some of his best, have been in circulation bearing the labels of ‘Guarnerius filius Andrea’, ‘Carlo Bergonzi’ and ‘Pietro Guarneri’, although there is little resemblance between his work and these three.

The magnificent violoncello illustrated is an outstanding example of Montagnana’s craftsmanship. It is dated from 1735 and is in an uncut state, measuring 29 ¼ inches in body length. The chick untouched varnish of a rich orange-brown is in a remarkably fresh condition. Montagnana’s varnish has a richness and texture which sets it apart from almost all of his Venetian contemporaries. The wood is of exceptional quality and appearance and his workmanship of an equal with the giants of Cremona.