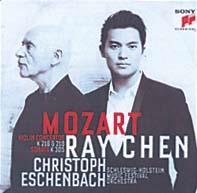 Taiwan-born, Australian-raised violinist Ray Chen has turned to Mozart for his third release with Sony. Chen may be well-groomed and fashion-conscious (he is supported by Giorgio Armani), but there’s no hint here of style over substance. The brilliant sheen of his playing is supported by plenty of character and there’s never any sense of uncertainty as to the purpose or direction of any phrase. In the finales of the two concertos, Chen marries a light touch with poise and humour. In both concertos he plays his own cadenzas, neatly constructed and stylistically sympathetic. There’s a soft grain to the sound of the orchestra, but the balance is ideal.

In many ways the most enticing performance on this disc is that of the Sonata in A major K305. Here Christoph Eschenbach swaps podium for the keyboard, and his pearlescent playing draws Chen into a performance of great intimacy, even in the first-movement Allegro di molto. But it is in the second movement that the duo most impresses – the theme becomes a graceful aria, whose successive variations seem to explore the theme in ever greater depth and wonder.