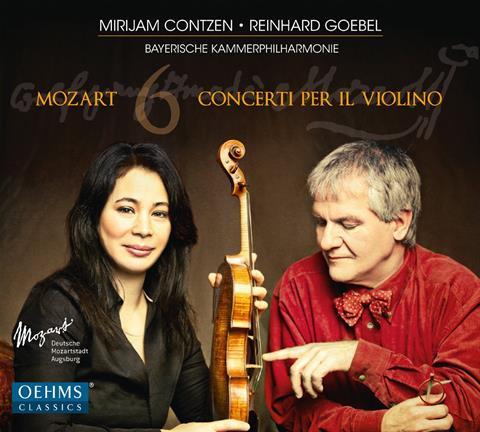 A set of Mozart concertos given by former Tibor Varga pupil Mirijam Contzen and directed by period-instrument specialist Reinhard Goebel (currently concentrating on ‘galant’ repertoire) is an interesting prospect. In the 21st century, there are many ways of approaching this music, although unmodified mainstream renditions are becoming increasingly scarce. Goebel, with modern instruments, brings his experience of historical playing to bear, delivering shapely performances with crisp articulations and brisk tempos. Indeed, some of the slow movements, such as that of K216, seem quicker-paced than many of us would expect of an adagio, and here, Contzen tends to pull the tempo back on the entrance of the violin theme suggesting, perhaps, a slight lack of agreement. Moreover, the almost ‘scotch snap’ grace notes in the first movement of K218 seem mannered.

In fact, Contzen’s overall playing does not always convince. On the one hand, she gets things off to a good start in K207 with tidy and intelligent playing, but some of the shorter articulations sound a bit brusque to my ears (such as the two-note anacrusis figure in the second movement of K207). Across the two discs, one soon tires of her bright, ‘forward’ tone that, on the E string, can sound hectoring and wearing after a while – although the extent to which this is a matter of production decisions or violin playing is a little hard to ascertain. For me, the greater gravitas of K271A works best. Overall, this set highlights a currently fashionable reading of Mozart with advantages and drawbacks in equal measure.