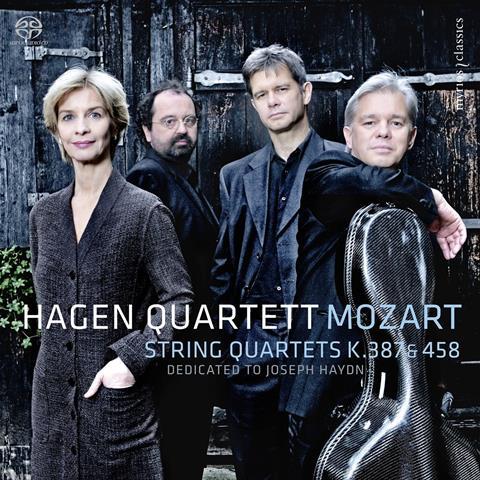 Just like skinning a cat, there are many ways of interpreting Mozart. The Hagens opt for a no-holds-barred Romantic approach, showing little concession to historical style but shaping the line with striking individuality. The players’ fragmentation of the opening phrases of the first movement of K387 regrettably comes at the expense of continuity. Their addition of up to one bar’s length of unscripted silence after key phrases in the same work’s trio disruptively reforms Mozart’s symmetry. However, such comments are essentially grasping at critical straws in the wind. Elsewhere, the Hagens allow the music to breathe freely, as in their commendably spontaneous minuet of K458; and the clarity of their articulation and voicing of the counterpoint in the spirited finale of K458 are particularly effective.

Leader Lukas Hagen holds most of the aces in these commanding and often exhilarating readings but the unanimity of these players’ relaxed interpretations confirms a true team effort. They apply a wide range of dynamic nuance, vibrato and timbre, particularly in the first movement of K458; the slow movements, too, are expressively conveyed, particularly the introspective Andante cantabile of K387. Internal blend, balance and ensemble are impeccable and the exemplary recording does full justice to the Stradivari instruments in their hands.