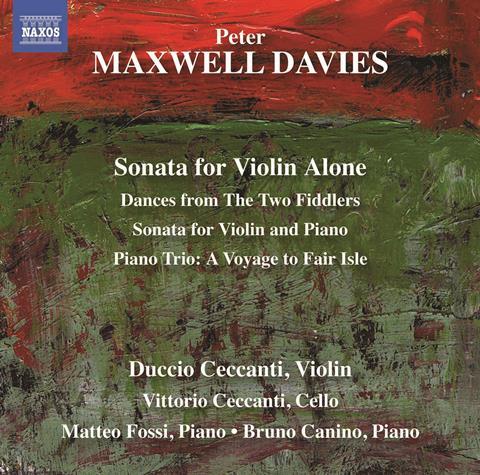 This rewarding disc already serves a valuable function in bringing together a clutch of major chamber works from Peter Maxwell Davies’s final years. But it’s just as compelling as a portrait of Italian violinist Duccio Ceccanti, who plays on every track. He’s a player deeply immersed in contemporary music, and clearly feels a profound identification with Maxwell Davies’s intensely expressive music – from its stubborn contradictions to its radiant lyricism.

Maxwell Davies wrote his 2013 Sonata for Violin Alone for Ceccanti, and the violinist’s performance here is breathtaking: forthright in Maxwell Davies’s almost rhetorical gestures, yet beguilingly lyrical in the composer’s sideways shifts into tonality. It’s an immaculate, impeccably articulated performance, vividly characterised, and given even more presence by the very resonant acoustic of its recording venue, the Museo di Santa Croce in Umbertide.

For the 2008 Violin Sonata, Ceccanti is joined by eminent Italian pianist Bruno Canino, and together they expertly trace Maxwell Davies’s fascinating interplay between their two instruments – sometimes accompanying each other, at other times jostling for attention. The evocative piano trio A Voyage to Fair Isle is as choppy and unpredictable as the seas between Maxwell Davies’s Orkney home and the tiny island to the north of it, and Ceccanti and his colleagues offer a considered, atmospheric account. Only in the rambunctious, folksy dances from the children’s opera The Two Fiddlers is there a sense that they could perhaps let their hair down a little more. Recorded sound, while varied between the pieces, is warm and generous throughout.