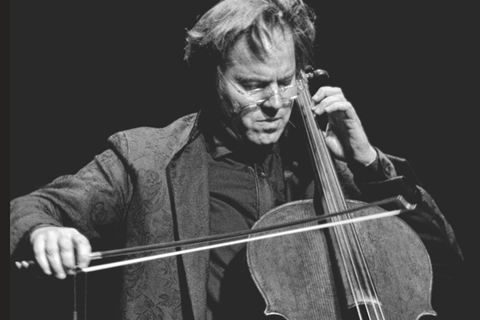 I adore Schumann and, of course, that has a lot to do with his magnificent Cello Concerto. But Schumann’s Fantasiestücke are also favourites of mine: they reflect good times in his life and they represent a sanguine side of his personality, very different from his Concerto or Fünf Stücke I’m Volkston. While the extreme expressions and mood swings of those later works are absent here, these three miniatures still contain everything you can express with a cello’s voice within the traditions of the 19th century. The key is in the title: they should be played with fantasy and imagination. First you need to imagine the colours, then you have to figure out how to create them. To convey that through four strings takes technique and skill, and in these pieces that is very demanding.

One of Schumann’s greatest talents was in writing song, and the Fantasiestücke are the most vocal of his cello pieces. If you don’t want to go as far as playing actual songs on the cello – and I know it’s a matter of taste! – then please at least listen to Fritz Wunderlich singing Dichterliebe. He was ready to change anything to make his singing more beautiful. Listening to him will give you inspiration for how to play the Fantasiestücke too.

I love this piece the most of the three. For me it is a bit like Fauré’s Après un rêve, as though you have just woken up and you are coming from nothing, with a sleepy bow and a sleepy left hand. It begins ‘Zart und mit Ausdruck’, meaning tenderly and with expression, so work with your pianist to create a light touch, with unaggressive fortes that have a big sound but are still half asleep. Everything has to be subtle and organic, in a slow tempo (q= 80), as though you are composing the piece while you play it, creating every note from scratch as you linger in your dreams, still not quite conscious. I would recommend developing a sophisticated vibrato strategy for this piece. I use a wide and slow vibrato on the notes with swells, such as in bars 2, 4, 5, 7, 8, 11 and so on; otherwise I play almost without vibrato, except for the big forte sensations in bars 17, 35 and 53, which I think of as arches or broadenings. Here you can use a more expressive, animated vibrato, as for the fortepianos from bar 22. On the notes without any markings, less is more.

Fantastic bow control is key to making this piece a success. Try to play the unmarked notes with almost no bow, then use a faster bow speed for the swells. Make sure you’re not too animated in the sleepy piano of bar 16, but really start from the fingerboard and accelerate towards the bridge for the crescendo in bar 17, to open and brighten your sound for the forte.

The fortepianos in bars 22, 24 and 27 can be extreme and eccentric; then the passage from bars 29–34 needs to be lazy, even and sleepy again, as the harmonies create Schumann’s fantasy world. In 34 the music wakes up to a big forte within that same slow-motion character. Just let the music play for the pianissimo from bar 58. Come in with almost nothing, then, after that really special D sharp in bar 61, try not to let the crescendo peak until the second quaver (e) of bar 62. This turns the hairpin into more of an arch that gradually disappears away again, which to me sounds more imaginative. Then start anew in bar 63. Don’t just land on the F – go back to nothing before you let the music grow again. In Schumann, the down-beat that up until Beethoven was a strong element for every bar starts to disappear.

Avoid playing strong down-beats, unless there is a crescendo to take you there. Rubato is important in this piece: stretch the swells and be free with the line, so that they don’t sound like accents. The only real landing notes are the fortepianos of bars 22, 24 and 27. The rest are arches or broadenings, as in bars 17, 35 and 52.

Your rubato should be in sync with your bow arm and vibrato, so that all three  combined bring out Schumann’s magical markings. It’s an intriguing sound world, vague and yet with a lot of colour. We don’t want too much clarity to our crescendos, and rubato and vibrato can help to make them more subtle and less fundamental. Remember to work on these ideas with your pianist, who has much more music to play than you do! Find out how you can best support the harmonies  together, while being careful not to give away anything of the pieces that follow.

This piece is the hardest of the three. The tempo, at q= 138, is a huge jump up, and the first part is almost Impressionistic in its search for sounds and colours. It should be fast and temperamental, but also light – the fieriest movement is still to come.

As with the first piece, Schumann writes hairpins with lots of pianos and pianissimos, and no real down-beats. To begin, show the swell in the second half of bar 3, with vibrato and without using a harmonic, but avoid the down-beats of bars 4 and 5. For fast crescendos, such as in bar 13, begin with almost nothing, then bring your bow quickly to the bridge to articulate the fortes that follow. Return almost to nothing again afterwards, by moving back to the fingerboard and using very little bow. If you can achieve this liquid use of bow length, speed and contact point within each bar, you will really create the lebhaft, with all its animated dynamic changes and swells.

I struggled with the theatrical, recitative-like middle section from bar 27 for about 20 years. Now I realise that it can be free and wandering, although it is also articulate and matter-of-fact.

Schumann’s musical language here is a reference to Beethoven and can sound earthy, in stark contrast to the beginning of the movement. The character is very much spoken instead of sung, so tell its story with eloquence, clarity and articulation. The swells in bars 29, 33 and 45 break out of this talkative character again: they are singing, almost sentimental interruptions and can take their time.

The jump in bar 33 is not easy! I go to the D string in the first half of the bar and then leap on to the A string for the C, where I take extra time to emphasise the swell and allow it to bloom. It is very important, in the second half of the middle section, not to crescendo to those beautiful high B flats from bars 35 or 41. Use rubato if you want to make them longer, but don’t get louder or you will take away from the real swells that come in bars 37 and 43.

The matter-of-fact forte in bar 48 brings an end to the middle section; the accents in bar 49 can even sound a little bit Germanic and grumpy. They should be enthusiastic but characterful, to contrast with the beautiful, liquid piano passage to follow. From bar 51 the piano can take its time as the music starts to roll again. Then, in the coda from bar 64, the music falls back into the slow, quiet character of the first piece, in preparation for the explosion to come. 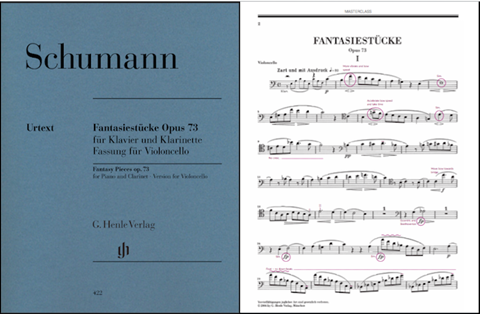 To see the marked-up sheet music, in association with Henle Verlag, download The Strad’s April 2019 issue on desktop computer or via the The Strad App, or buy the print edition

Most cellists play this piece the best: it is fiery, fast and uncomplicated, at q = 160 – another big step up in tempo. It should be temperamental and articulate. The piano has a difficult rhythm to begin, so make sure you give a good down-beat gesture to help you coordinate in the first bar and meet in the second. If you don’t address this in your rehearsals, you will notice it in the concert! Create a strong attack from the very first note: don’t take the hairpins too literally where these semiquaver (s) runs occur, as they start in a low register and if you begin too quietly the beginning will be lost. This opening has to be carefully moulded to make it clear that the main motif only comes in bar 3. Really keep the second bar open, without a diminuendo, and phrase very clearly; make sure that the accents in bars 3, 4, 7 and 8 are distinct and imaginative, to avoid sounding repetitive.

For the middle section from bar 24, the cello part should float lightly above the piano, without being too active, before Schumann leads us back into a fiery tempo in bar 41. There is a repeat in bar 45, so the first time around I would play the line with more pride and a rather festive finish; the second time can have more direction, almost like a landslide into the second ending, as we fall back into the fire.

I interpret the coda from bar 68 to be for all three pieces, so I pull the tempo back a little bit here and take a moment to reflect on the whole composition. You can sing and float through the beautiful bars of 68–70, before building up again in the Schneller from bar 76, making sure that you leave room for the second Schneller in bar 91. This should be at least q = 180, to make a real, tempo change: finish in a fast, crazy, fugitive mode, so that it sounds as though the piece isn’t really ending.

To see the marked-up sheet music, in association with Henle Verlag, download The Strad’s March 2019 issue on desktop computer or via the The Strad App, or buy the print edition