Bassist with the WDR Big Band in Cologne, Germany, and author of Jazz Bowing Techniques For The Improving Bassist and The Jazz Bass Book. Taken from the June 2009 issue

Leroy ’Slam’ Stewart was a bass star who rose to fame in the 1930s entertaining huge audiences on radio shows and in films as part of his duo with guitarist Slim Gaillard. Until his death in 1987, Stewart played almost every improvised solo with the bow – a rare approach for jazz bassists. In addition, he would sing along with his improvised lines, one octave above the bass. The aural effect was stunning – a mixture of human singing and rhythmically adventurous bowing that defi ned his distinctive jazz voice.

Was it the bowing, the singing, or the combination of the two that made Stewart’s improvised lines so compelling? Jazz is a never-ending search for identity. Musicians spend years imitating their heroes, but also strive to develop an individual sound that sets them apart from all other voices speaking the jazz language. Because of his bow technique, Stewart had an individual voice from the beginning of his career – he is identifi able on a recording within a few bars.

Improvising with the bow is a wonderful addition to the bassist’s arsenal. But a bassist must devote considerable practice time to making improvising with the bow a viable option that actually sounds good. Sometimes bassists look down on jazz bowing because it can magnify intonation issues, poor rhythm, or bad note choices. These are all problems that can – with proper practice – be overcome.

Slam Stewart’s ‘bowing and singing’ style of improvising has been labelled by some as affected or corny. But these critics miss a crucial aspect of the jazz tradition: jazz music showcases individuals in the combined context of entertainment and virtuosity. Stewart was nothing if not individual, and he was one of the most entertaining and virtuosic jazz musicians of his era on any instrument.

The opening of his solo on Sometimes I’m Happy with Lester Young from 1943 shows the swing style phrasing he used (example 1). The slur marks in bars two and four denote the fast, short glissandos that Stewart played (and sung) as he slid off the note. Other jazz bassists have used the bow with great success. Jimmy Blanton (1918– 42), considered by many to be the father of modern jazz bass playing, recorded a series of duets in 1940 with his employer, Duke Ellington.

An excerpt from one of the duets, Mr J.B. Blues, shows Blanton’s style of articulation (example 2). His playing sometimes suffered from poor intonation – to 21st-century ears, the recordings can sound raw. But his improvisational brilliance and cleverness, plus his knack for swing, laid the foundation for all jazz bassists who followed.

Paul Chambers (1935–69) often used the bow to present his solo voice. His bowed solos defi ned the sound of jazz arco bass in the 1950s and early 60s, and he is still revered by bassists for his command of bebop ensemble and solo techniques. Most bassists improvising bebop-style jazz today have deeply assimilated the work of Paul Chambers. His style of articulation can be seen in an excerpt from The Theme (example 3).

Charles Mingus, Red Mitchell and David Izenzon used the bow in varied contexts in the bebop, post-bop and free-jazz eras. Many contemporary bassists continue the jazz bowing tradition – the young New York bassist Ari Roland, for example, plays almost every solo with the bow. John Clayton, Lynn Seaton, Christian McBride and others carry on in the bebop tradition by often using the bow in their improvised solos.

Modern crossover players such as Edgar Meyer, Renaud Garcia-Fons, John Patitucci, Michael Moore, Eddie Gomez and Árni Egilsson are blurring the lines between jazz, classical and other improvised art forms while raising the bar of bow technique for all improvising musicians. Bassists who carry the jazz bowing tradition forward expand their improvisational voice and have a huge palette of melodic and rhythmic colours at their fi ngertips. Let’s look at some of the bowing techniques that jazz bassists use. 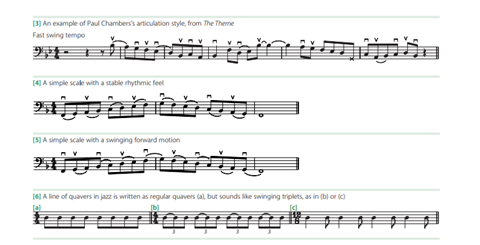 There are two main factors that determine whether or not an improvised melody sounds like jazz: the melodic material has to describe the harmonic progression of the music; and the rhythm must ‘swing’. The swing feeling is diffi cult to describe, but we know it when we hear it. Swing or ‘forward motion’, as it is sometimes called, is a common characteristic of all forms of jazz. The music feels like it is moving forward, being created from an organic, natural flow.

Of course, classical players achieve this fl ow when playing written music, but in jazz the fl ow is a defi ning characteristic of the improvised context. The title of Duke Ellington’s song It Don’t Mean a Thing (If It Ain’t Got That Swing) has become a jazz mantra. In classical music, we are taught that down-beats are strong beats and up-beats are weak beats.

We practise our scales and musical passages accordingly to fi t the tradition. In jazz music, we find that weak beats or off-beats are often accented. These accents give the sound of jazz its unique forward motion. The way we organise our bow strokes can mean the difference between a swinging improvised line and a stagnant one. Take a simple scale passage (example 4). If you play two notes per bow stroke with the down-beats accented, you have a stable rhythmic feel.

You can start the two-note groups on the off-beats, giving a slight accent to the ‘ands’ of the beats. If you play two notes per bow stroke with the up-beats accented, you create a swinging forward motion that propels the sound (example 5). This swing rhythm is a crucial element of jazz phrasing. Jazz rhythm is based on triplets. A jazz line made of quavers (♪) sounds differently from how it is written (example 6).

By using bowings that complement this style of quavers you can create a swinging solo line. The best way to learn to swing is to listen to and imitate players you like and then incorporate into your playing the techniques that make those players stand out. In addition to listening, you must devote time to learning bowing techniques that swing, plus jazz melodies and patterns that you can automatically play in every key. 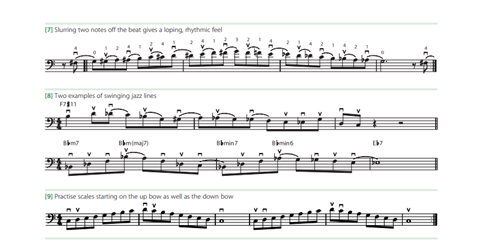 Playing chromatic scales is another good way to learn to slur two notes off the beat. Begin the slur on the ‘and’ of a beat and then play two notes per bow stroke. This puts a slight accent on the ‘and’ and gives a loping, rhythmic feeling to the line. You can practise this technique at various tempos up and down the G string (example 7). You might notice an uncomfortable problem here.

You must ‘practise the unpredictable’ in order to be able to improvise. Try playing the chromatic scale up and down other strings and also across all four strings. Even when you play a stringcrossing, you should keep two notes per bow stroke. Once you master the chromatic scale with two notes per bow beginning on the off-beat, then try to play other scales in the same fashion.

By placing some of the slurs and accents away from the strong beats (one and three in a four-beat bar), and placing notes from the changing chords so they land directly on beats one and three, you can improvise a jazz line that swings (example 8). Note that the bow often changes direction on the ‘and’ of the beat, and slurs into the next strong beat (either one or three).

By placing chord tones directly on beats one and three, you can ‘hear’ how the harmony is moving. This tension and release – slightly accented off-beats and chord tones on beats one and three – creates the all-important forward motion that characterises jazz rhythm. The biggest obstacle when improvising with the bow is the feeling that we are playing an up bow when we should be playing a down bow, or that we are placing an accent on the wrong subdivision of the beat.

The best way to solve this problem is to practise the unpredictable: play scales, arpeggios and patterns starting on the up bow as well as the down bow (example 9). By forcing yourself to begin with an up bow, you might hear the weak beats (the ‘ands’ of the quavers played with the down bow) as slightly accented, but this is a characteristic of jazz quavers.

It is crucial that you listen to jazz bowing in order to be able to emulate the sound. The bowed bass has a vocal quality (think Stewart) and also a very horn-like sound (think Chambers). You can also listen to the great jazz horn players and imitate their rhythmic approaches to improvising quavers. Sonny Rollins, Lester Young, Chet Baker and Miles Davis (especially his work from the 1950s) are all good role models for jazz quaver lines.

In theory, playing the bass with good technique does not depend on whether you are playing jazz or classical music. However, there are many stylistic differences in jazz that you can only learn by listening to master improvisers and assimilating the sound of the bowed jazz bass. When you listen to jazz, you will fi nd melodies and patterns that appeal to you. These personal preferences form the basis of your sound – this is the way you like to hear a jazz line.

Once you pinpoint some of the players that you like and want to emulate, then you are well on your way to creating your own jazz voice. The ability to improvise is no secret – the jazz musician develops an individual voice through emulation and innovation. By slowly integrating jazz bowing techniques into your practice routine, you can join the elites of the jazz tradition. Work on your jazz bowing skills and you will be rewarded with more possibilities to express yourself through your instrument.