The freeform style of the Vogtland’s violin tradition

In this excerpt from an article published in The Strad April 2020, Rudolf Hopfner and Monika Lustig use CT scans to examine instruments by four fascinating and little-known makers from the Vogtland 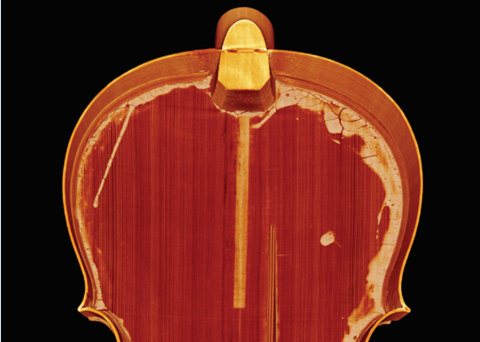 An inside view of a violin by Andreas Dörffel, Klingenthal, after 1772

Lying in the state of Saxony in eastern Germany, the Vogtland region has for centuries been a well-known centre of musical instrument making, and produced some of the country’s least known and most fascinating instrument makers.

Its origins lie in the 1650s, when a group of twelve violin makers from Graslitz (Kraslice), in neighbouring Bohemia, came to settle there. In 1677 the region’s first violin making guild was founded in Markneukirchen, with a second guild established in Klingenthal about 40 years later. The Upper Vogtland was a remote region in the Erzgebirge mountains, away from the big cities and noble families, and without direct contact with musicians. However, there was a flourishing market for instruments there, as well as dealers: both essential requirements for the development of an instrument manufacturing trade. During the 18th century, a number of extended violin making families developed: the Dörffel, Ficker, Glass, Gütter, Hopf, Reichel, Schoenfelder and Voigt families to name but a few. By the end of that century there were already about 200 masters in the Upper Vogtland. The 19th century was characterised by increased production, owing to the development of an entrepreneurial business model. The dealers were generally pushing for mass production, requiring the makers to economise on materials and speed up the working process, which ultimately had a negative impact on the instruments’ quality.

A recent research project has for the first time given us a chance to make high-resolution CT scans of four representative instruments by Vogtland makers – three violins and a viola. These were chosen from the collection of the Kloster Michaelstein – Musikakademie Sachsen-Anhalt für Bildung und Aufführungspraxis (music academy for education and performance practice), founded in the 1980s by the conductor Eitelfriedrich Thom, which contains around 180 stringed instruments from the Vogtland region.

The high-resolution CT scans allow us to study structural characteristics of these instruments in detail. Figure 1 shows the plates and rib structure of the Andreas Dörffel violin and prove that the instrument, like the other three, has been built freeform. This technique belongs to an early tradition of violin making that spread to almost the whole of Europe. However, by the mid-17th century most areas in the northern Alpine violin making traditions, for example in Austria or in Bavaria, had adopted the Italian technique of using an internal mould. By contrast, the makers in the Vogtland region clung to their traditional freeform construction with the neck and top-block made in one piece (the so-called ‘through-neck’) until well into the 19th century. Even in the years after World War II the freeform construction technique, now with a conventional top-block, has been part of the training of luthiers working in the Vogtland tradition.

Also in the April issue: Pöpel and Kurzendörffer: The Mists of Time Demystified Just three Vogtland instruments exist from before 1700. All violas, they were made by two of the founders of the region’s first violin making guild. Klaus Martius explores what we know about the mysterious Johann Adam Pöpel and Johann Adam Kurzendörffer.

This is an extract from a longer article in our April 2020 issue, in which Rudolf Hopfner and Monika Lustig tell the history of the Vogtland lutherie region in Germany, and describe the early freeform characteristics of four historical instruments by Vogtland makers. To read the article in full, click here to sign-in as a subscriber or sign-up for a free 7-day trial.

The April 2020 digital magazine and print edition are on sale now. To subscribe to The Strad, please click here.