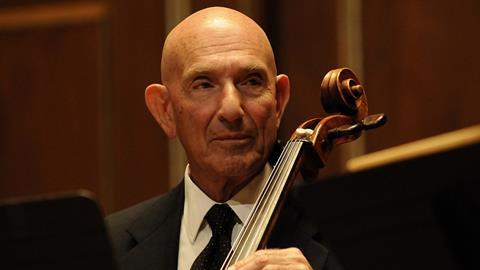 Jules Eskin, who served as principal cellist of the Boston Symphony Orchestra for 53 years, has died of cancer at the age of 85.

Born in Philadelphia, Eskin studied with János Starker in Dallas, and with Gregor Piatigorsky and Leonard Rose at the Curtis Institute of Music. At 16 he joined the Dallas Symphony Orchestra under Antal Dorati, and in 1954 he was awarded first prize at the Walter Naumburg Competition.

Eskin was appointed BSO principal in 1964 after three years serving as principal cello with the Cleveland Orchestra under George Szell. He performed as a soloist with the BSO on numerous occasions, including in the cello concertos of Dvorák, Haydn, Saint-Saëns and Schumann.

His chamber music collaborations included appearances with Isaac Stern and the Guarneri String Quartet. As a founding member of the Boston Symphony Chamber Players, he recorded works for the RCA, Deutsche Grammophon, Northeastern, and Nonesuch labels.