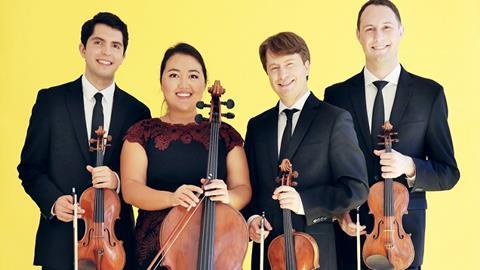 New York's Lincoln Center has named the recipients of its 2017 Awards for Emerging Artists - drawn from the eleven resident organisations at the venue.

Among those honoured for their 'outstanding artistry and promising future' with a $7,500 cash prize and performance opportunities are the Calidore String Quartet (pictured) and violinists Frank Huang and Paul Huang.

Members of Lincoln Center's Chamber Music Society, the Calidore Quartet won the inaugural $100,000 M-Prize in 2016. They are current BBC New Generation Artists, and recipients of the 2016 Borletti-Buitoni Trust Fellowship.

Recipient of the 2015 Avery Fisher Career Grant, violinist Paul Huang made his Lincoln Center's Great Performers debut last season, stepping in for Midori with Leonard Slatkin and the Detroit Symphony. A graduate of The Juilliard School, Huang received the Kovner Fellowship and won the 2011 Young Concert Artists International Auditions.