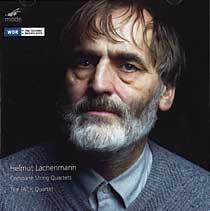 The Strad Issue: January 2014
Description: Performances so seemingly precise that they neglect the music in the sounds
Musicians: Jack Quartet
Composer: Lachenmann

Think of this as a reference item to be dipped into: it’s not easy taking in the complexities of Helmut Lachenmann’s three string quartets in a single sitting. His ‘instrumental musique concrète’ creations focus on all the instrumental sounds we don’t normally value – rubbing and knocking instrument bodies, scraping strings, rasping bow noises – as basic building blocks of music. And in the Jack Quartet’s forensically analytical, frighteningly tight performances, recorded in seemingly microscopic detail, not a single click, scrape or whoosh goes unnoticed.

And that’s kind of the problem. The players are so searingly precise in their ensemble, so urgent and assertive in the sounds they create, that they seem to disregard the nuanced imperfections that would help transform these catalogues of noises into music.

That said, these are breathtakingly vivid performances, delivered with unwavering conviction. Gran torso takes on an almost industrial-sounding edge with the harshness of some of the noises the Jack players discover, and they bring remarkable clarity to the shifting tonal centres of the marginally more conventional-sounding Grido. Their ghostly flautando sonorities in Reigen seliger Geister hardly wallow in sonic beauty, but the foursome dispatches the piece with scorching energy and pinpoint accuracy. In many ways, it’s hard to imagine finer performances – but that doesn’t make them an easy listen.