Ivry Gitlis, movie star: Legendary violinist back on screen at the age of 90 in new French comedy 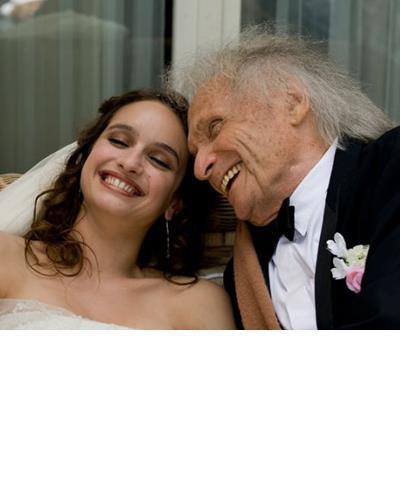 The great violinist Ivry Gitlis stars in a new film that opens in French cinemas tomorrow. In the Danièle Thompson-directed 'Des gens qui s'embrassent' (People Kissing), Gitlis plays Aron (pictured), the patriarch of a Jewish family that comes together for a funeral and a wedding. Comedic tensions are played out in the conflict between two brothers, one a yacht-owning playboy-type, and the other an ultra-religious violinist. The film also stars Monica Bellucci.

Aged 90, the Paris-based, Israeli-born Gitlis is no stranger to the movies. He starred as a hypnotist opposite Isabelle Adjani in Truffaut's 1975 film 'L'histoire d'Adèle H.', and in 2003 he was the enigmatic Monsieur Click in the award-winning arthouse drama 'Sansa'. There have been several cameo roles too, as well as an appearance in a 1982 episode of the TV detective series 'Maigret'. Gitlis himself was the star of a 2004 documentary film, 'Ivry Gitlis and the Great Tradition', which was released on DVD in 2012.