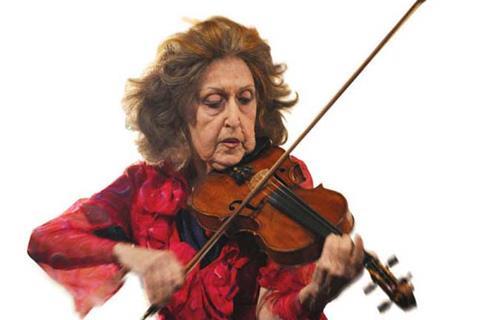 Born in Chelm, a small town in provincial Poland, Ida Haendel first picked up her father's violin at the age of 3 and won her first competition, the Huberman Prize, when she was five, playing Beethoven's Violin Concerto. Her family recognised her potential immediately and spent several years travelling around Europe in pursuit of a musical education. She first travelled to Warsaw to study under Professor Michalowitch at the Chopin School of Music. She studied occasionally with Georges Enescu before the family eventually settled in London, where she was a student of Carl Flesch. During World War II, Haendel played for English troops and performed in Myra Hess' National Gallery concerts. After the war she began to develop an international reputation, touring South America and Asia. Her signature pieces are the concertos of Elgar, Brahms, Britten, Sibelius and Walton, the latter two both having personally praised her performances of their works. Haendel was given the Sibelius prize in 1982 and was made a Commander of the British Empire in 1991. Haendel now splits her time between Miami and London but regards London as a special place because of the number of good orchestras which are based there. Haendel's violin is a Stradivarius of 1699.