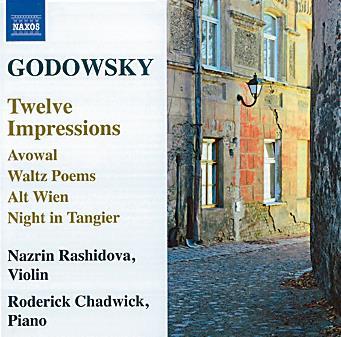 Leopold Godowsky is principally celebrated as one of the finest pianist–composers of the early 20th century, yet his violinist connections and admirers were no less exemplary. Avowal was written for Mischa Elman, the 12 Impressions for ‘my dear friends Harriet and Fritz Kreisler’, the first of the Waltz Poems for Jascha Heifetz and the second for Paul Kochanski, while the skilful adaptations of Alt-Wien and Night in Tangier were made by Heifetz and Kreisler respectively. All were arrangements of existing solo piano works (most notably the 24 Walzermasken), while much of the editorial work was done by Godowsky’s violinist son, Leo II.

This music radiates enchanted contentment and bonhomie in much the same vein as Kreisler’s own indelibly Viennese miniatures. It is an idiom that has defeated even some of the finest players, yet Azerbaijani-born Nazrin Rashidova captures its elusive, tantalising combination of insouciant cool and nostalgic intensity to perfection. You have only to listen to the way she times and subtly portamentos the main theme of the ‘Tyrolean’ (no.4 of the 12 Impressions) to know you are in the safest of hands, even if a richer, fatter timbre might have sounded even more alluring. First-rate sonics and a highly informative booklet note from Naxos stalwart Keith Anderson round out a most enterprising and worthwhile release.