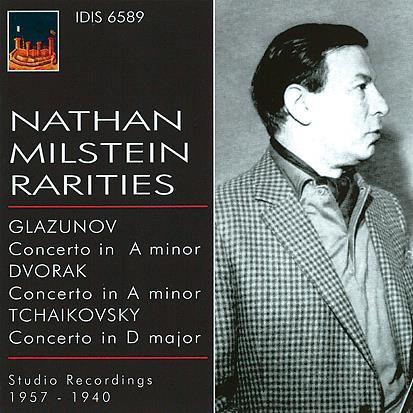 Nathan Milstein had special insights into the Glazunov Concerto, having performed it several times either with or in front of the composer. This, the middle of his three recordings and the second one with Steinberg, is his best, a sovereign piece of playing that makes one regret all the more that the first movement is so foreshortened. Every note from the great violinist falls into place with classic inevitability.

The Dvo?ák, too, is the second of three attempts and rock-solid in every department. In this work I often feel that non-Czech players give rather generalised readings – though not Busch (Arbiter) – but with that proviso, Milstein is brilliant technically and glowing tonally. Orchestral support is excellent in both these works, the 1957 mono recordings likewise, although EMI’s own remasterings are smoother.

Milstein also did the Tchaikovsky with Pittsburgh/Steinberg but Dynamic opts for the first and most spontaneous of his four recordings. Perhaps fired up by the necessity to get everything right first time for the 78rpm process, the soloist really goes for every note and the result is hugely exciting, despite Stock’s rather phlegmatic backing. One or two passages almost come to grief but Milstein never falls off the tightrope.