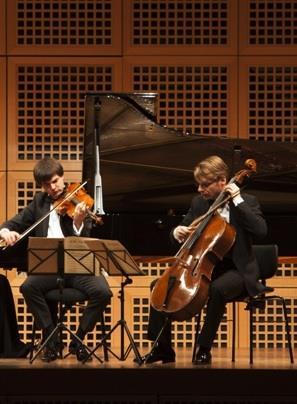 The Notos Quartet from Germany has clinched the €12,000 first prize at Italy’s Premio Vittorio Gui International Chamber Music Competition after performing Brahms’s Piano Quartet in C minor op.60 in the final round.

The win is a particular coup for the ensemble since the last two editions of the competition have yielded no first prize winners.

No second prize was awarded at this year’s edition, but the Italian cello–piano Duo-Sinagre–Cossi came third and received €3,000.

The Notos Quartet formed in 2007 and comprises violinist Sindri Lederer, violist Malte Koch, cellist Florian Streich and pianist Antonia Köster. Its past accolades include the 2011 Parkhouse Award in the UK and first prize at the Charles-Hennen International Chamber Music Competition in the Netherlands.

The competition, which is named after Italian conductor and composer Vittorio Gui, was held at the Teatro del Maggio Musicale Fiorentino in Florence, Italy. Previous first prize winners include the Navarra String Quartet.