From the Archive: a Zanetto viola 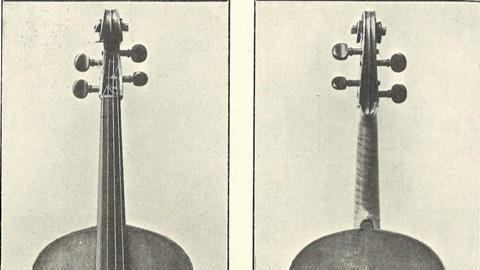 This illustration of a Zanetto viola was published in The Strad, January 1917. The following text is extracted from the article accompanying the photographs:

I am not acquainted with any English fiddle books which throw much light on Peregrino (or Pelegrino) Michelis di Zanetto, the maker of this extremely interesting viola. In Hill’s book on Stradivarius is a passage of a general nature which I quote:

‘Before 1660 we find the makers – Zanetto, Gasparo, Maggini, the Amati, and others – frequently constructing the large viola, but very rarely the small ones’.

Taken literally this would imply that Zanetto did occasionally make violas of what is nowadays accepted as the standard length (about 16 ¼ inches long); but as the writers in the chapter from which I am citing, attribute the introduction of the smaller type to the brothers Amati this is clearly not what was meant to be conveyed. One other conclusion is that tenores by Zanetto are at least not uncommon, and I must confess that I was unaware of this, the instrument figured being the only example I remember to have met with.

The maker was the son of a Brescian viol and lute maker, and was born in or about the year 1520; or about 20 years before Gasparo da Salo.

The back and belly of this instrument are still in very fair preservation, but the sides have suffered somewhat from the ravages of worm. The varnish is a golden brown which still shews traces of its former fire. The belly is cut the right way of the grain, not slabwise as is said to have been with early specimens of Maggini. The back is of plain wood; the corners longer than those of da Salo; the purfling single; the head, of a primitive type, is turned somewhat short. The tone is of fine quality, with the sombre ring about it which seems inseparable from instruments of its class.