From the Archive: a violin by Tomasso Balestrieri, 1760 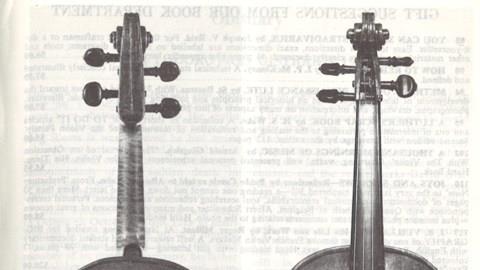 This illustration of a violin by Tomasso Balestrieri was published in The Strad, December 1974. The following text is extracted from the article accompanying the photographs:

Tomasso Balestrieri is one of those makers the quality of whose work varies very considerably, but even his less carefully finished instruments possess tonal qualities of a high order.

Balestrieri was born around 1735, possibly in Cremona. He died in Mantua in 1790. A number of his instruments bear a rough general resemblance to those of Stradivarius, which were made during the last few years of his life, 1730-1737.

At his best Balestrieri was one of the finest makers who worked in Mantua, a city which can lay claim to such masters as Pietro Guarneri, Antonio Zanotti and Camillo Camilli. He moved to Cremona from Mantua about 1752.

The Balestrieri illustrated bears a label dated 1760. The two-piece back is of maple marked with a faint, narrow irregular curl extending nearly horizontally across the back, the curl being slightly more prominent at the outer edges. It is marked with an iron growth in the upper right flank. The sides are of maple with a narrow, faint irregular curl. The maple of the scroll matches that of the back. The two-piece top is of spruce, medium fine grained at the centre, broadening slightly to the flanks. The varnish, which is ample, is a golden brown colour over an amber ground.