From the Archive: A violin by Anselmo Bellosio, Venice, c.1780 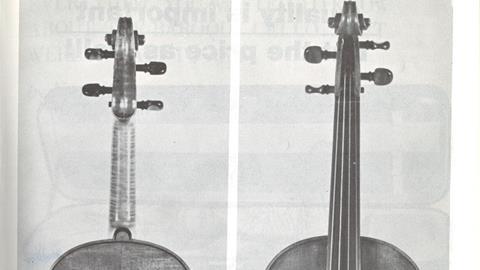 This illustration of a violin by Anselmo Bellosio was published in The Strad, June 1978. The following text is extracted from the article accompanying the photographs:

This typical example of the work of Anselmo Bellosio is unlabelled but dates from around 1780, the closing years of its maker's life.

Anselmo Bellosio was the son of Giovanni Belosio, a maker reputed to have been a pupil of Montagnana. Anselmo was a pupil of Sanctus Seraphin, and imitated his master's style. Both he and his father spent the whole of their working lives in Venice, where Anselmo died in 1785.

Like the majority of Venetian makers of his time, Bellosio used good wood and employed an excellent varnish, which on the violin illustrated is a light golden orange on a yellow ground. The two-piece back is marked by a medium flame ascending slightly from the joint. The ribs have a similar curl inclining to the left, the scroll with a medium curl. The pine of the table is of narrow grain widening at the flanks. The principal measurements are: