From the Archive: a violin by Alfredo Galea, 1979 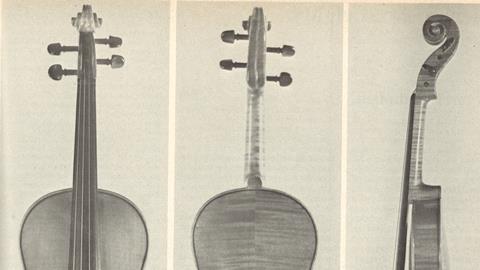 This illustration of a violin by Alfredo Galea was published in The Strad, March 1982. The following text is extracted from the article accompanying the photographs:

Among the Italian violins produced in this century, the instruments of Alfredo G. Galea merit special appreciation for their lustrous and flexible tone. After a violin making career of 60 years, Galea attributes his consistent success to the varnish formulation and application techniques he developed through years of experimentation.

Born in 1909 to Italian parents in Cairo, Galea became convinced that varnish dominates the tonal character in his late 20s, and sustained by this conviction, he devoted the next 35 years to researching violin varnish. Although of an oil base, his varnish dries quickly, within a few days, and it does not peel, chip, crack or flour. Further the varnish is ductile - it will dent rather than separate from the wood.

Galea has made approximately 200 instruments. One of his recent (1979) productions is illustrated here. It is based on a Stradivari pattern which Galea invariably follows. the two-piece spruce top has a medium-width grain and the two-piece maple back exhibits a nearly horizontal, medium curl. The colour of the varnish is orange-brown. The length of the back is 354mm and the widths of the upper, middle and lower bouts are 168, 106 and 210mm. the heights of the ribs are 29mm (upper) and 31mm (lower).